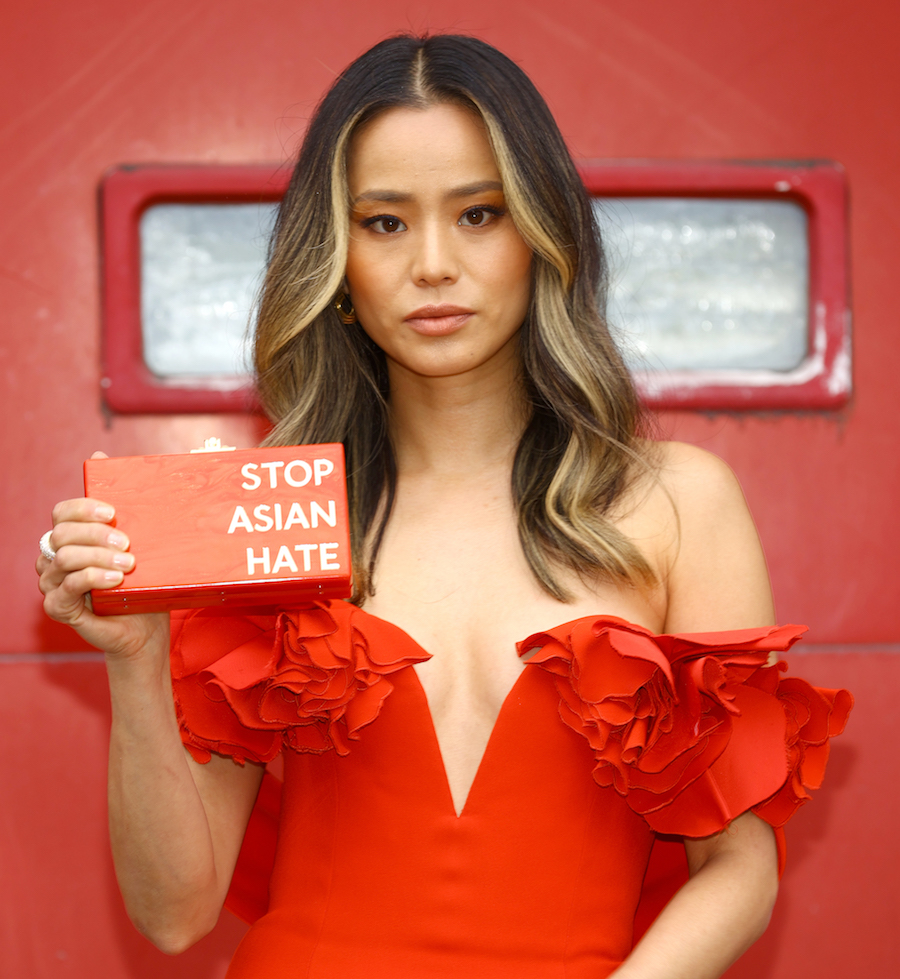 Last night’s (April 4) Screen Actors Guild Awards were pre-filmed with limited attendance due to COVID, and another round of fabulously-dressed celebrities graced our screens. With Ma Rainey’s Black Bottom, "Schitt’s Creek", "The Queen’s Gambit", and more among big winners, the show aired last night on TBS and TNT. Here are some of the best dressed stars of the night!

Kerry Washington, nominated for her stand-out performance in "Little Fires Everywhere", rocked this incredible gown on land – and sea! This beautiful blue custom Etro dress with matching swim cap and stunning Bulgari jewelry stood out in this awards season; she even wore this mermaid-silhouette dress in the water!

Nominated for Outstanding Performance by a Female Actor in a Drama Series for her role of Princess Diana in “The Crown", this newcomer is making waves on-screen and through her bold fashion choices continuing on in this Awards Season. This Prada look is truly “divine,” as Emma wrote in her caption, donned with Cartier jewels for this girly-yet-industrial look that beautifully mixes streetwear and awards show glam.

Viola Davis continues to stun us with her vibrant, classy looks all throughout Awards Season, and last night, she won SAG’s Outstanding Performance by a Female Actor in a Leading Role for her role in Ma Rainey’s Black Bottom. These looks have been everything we’ve loved this Spring -- the neon yellow-green Louis Vuitton dress that is embellished along the sides and even featured slits. Her jewelry, including shimmery pearl earrings, was by Forevermark, and perfectly accented her sparkly dress.

Jamie Chung, who plays Ji-Ah in HBO’s "Lovecraft Country", made a powerful statement at the SAG Awards, both in her fashion choices and by drawing attention to the recent uptick in anti-Asian violence over the past year. Her stunning red Oscar de la Renta dress featured a deep V and off-the-shoulder sleeve details, reminiscent of flower petals, and her matching Edie Parker clutch read "STOP ASIAN HATE". Her strappy red heels matched perfectly, which she noted have heavy significance in Asian cultures.

Leslie Odom Jr.’s stunning rainbow suit brought us all of the Spring vibes, and we couldn’t ask for more. This Berluti suit had a matching turtleneck underneath for the One Night in Miami star’s Outstanding Performance by a Male Actor in a Supporting Role nomination last night. Definitely a stand-out!

Another suit set we loved was Elle Fanning’s Gucci sequin suit. The flare leg and the wrap-top at the front gave us all the '70s vibes, and we love the sparkly stripe and sequin details. She stars in "The Great", which was nominated for Outstanding Performance by an Ensemble in a Comedy Series – definitely worth celebrating with a fun sparkly suit!

"Bridgerton" star Nicola Coughlan gave us everything in this classy black, sheer Christian Siriano gown. The lace details, the sheer accents, and the capelike top, along with her slicked-back hair and dark lipstick, was giving us a very Modern AU "Bridgerton" kind of vibe. Very classy and chic and extremely stylish.

Jared Leto is known for standing out – his long, straight brown hair already puts him on the high fashion scene, not to mention this stunning lilac Gucci suit he wore to the SAG Awards (no doubt thanks to his role in Ridley Scott's House of Gucci, which he is currently filming in Italy). The flowy, open button-down underneath his suit jacket, along with a matching neck scarf and golden seashell clutch, made his look one of the most memorable of the night. Not to mention the very on-trend Spring pastels!

Especially when we’re mostly still working from home and wearing sweats, it’s always a refreshing sense of normalcy to see our favorite stars all dressed up for award shows. From bold looks to starting new trends on the red carpet, we never know what celebs have in store until the night of – but it’s always worth tuning in!