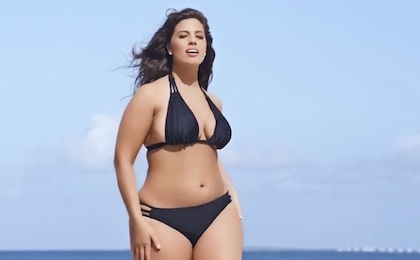 Congratulations to "plus-sized" model Ashley Graham for being featured in this year's Sports Illustrated's Swimsuit Edition! Graham is the face of new SwimSuitsForAll campaign, #CurvesinBikinis, which aims to help launch the “Curvy Girl Era” and help women feel confident and sexy in any swimsuit. Ashley is totally gorgeous, with her voluptuous curves and toned bod. I’m so happy for her! But there are three other curvy models who could stand next to her in that same swimsuit ad (WARNING: some links might be NSFW!):

Blonde bombshell Lizzie posed nude for Glamour in 2009! The untouched photos showed the model posing for an article about being comfortable in your own skin, and boy did she accomplish sending that message! The infamous photo has given the magazine pause at only using extremely skinny models. And if she can pose nude, she can definitely pose confidently in a swimsuit, right? Good for you, girl.

This beauty followed in her mom's modeling footsteps and is super successful! Her mother was the first African-American supermodel to appear on the cover of American Vogue in 1974. Anansa strutted the Lane Bryant show in 2011, was in the September 2011 issue of Glamour, and has been in national campaigns for major brands such as Vassarette, Kohl’s, Kmart, and Forever 21. KILLIN’ it.

Although I don’t personally consider any of these stunning women “plus-sized”, I’m relieved to know that magazines and fashion outlets are falling in line to hire women with with more versatile body types. It might be a while until we see some of these beauties in Sports Illustrated, so until then, let’s gawk at Ashley’s teaser video for her new campaign!

What do you guys think? Do they fit your definition of “plus sized”?