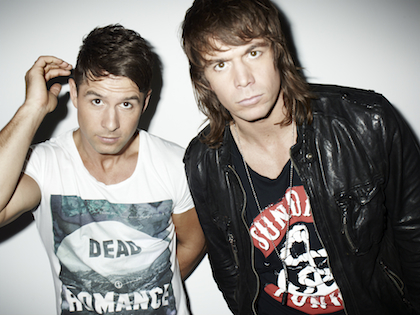 Calling all EDM lovers out there!

So, who are they?

Matt and Chris Stafford are two brothers who have been Australia’s #1 DJs for the last 3 years in a row. They were also ranked in the Top 100 DJs in the world for the first time in 2013. Their song "Hello" has hit triple-platinum selling status, reaching #4 on the official singles chart and #1 on iTunes (Dance). It was nominated for Song of the Year in the 2013 Australian Recording Industry Association (ARIA) Awards. In the week of launch, Billboard and Vibe Magazine both listed them as emerging artists of the week and then video release of the week.

The Stafford Brothers can been seen performing at their residency at the Cirque du Soleil’s The Light, Las Vegas in the Mandalay Bay Hotel and A-list performances at EDC, Tomorrowland, Ultra Music Festival, plus super clubs all over the world.

They are back in L.A. and are about to kick off their Fall North American Tour.