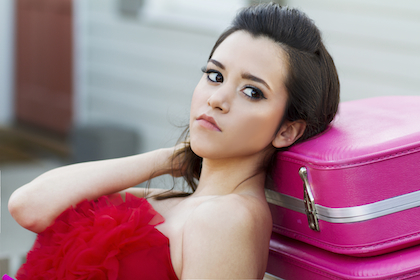 Internet sensation Megan Nicole is taking the music world by storm, having over 2.6 million subscribers and 504 million views on YouTube! To put that in perspective, she has more YouTube subscribers than Atlantic Records, Britney Spears, Lorde, and OneRepublic, among many other top selling artists. The 21-year-old singer has also released her debut album Escape on October 14. Check out the album trailer below:

If you haven’t already, go take a listen. She records her own original songs as well as well-known artists’ covers. I can totally see her becoming the next breakout star. She’s adorable and her voice is probably the sweetest thing you’ve ever heard. With her pink outfits and crazy high-note range, her fans are clearly obsessed, and rightfully so.

Born and raised in Texas, Megan did not grow up wanting to be a musician; however, she always knew music would be a part of her life. She played piano when she was younger, but it was in high school where she fell in love with writing and performing music. She purchased a guitar from a local pawn shop and spent many late nights at open mics. Her parents noticed her talent and decided to buy her a new guitar that she eventually used to make her first YouTube cover of Kings of Leon’s song “Use Somebody”.

Megan continued to record and upload her covers on YouTube, and it launched her career in 2009. She landed a spot in the coveted Top 100 Music Channels alongside Katy Perry, Adele, and Coldplay. She’s currently living in L.A., promoting her album, working on her music, and keeping her diehard fans happy!

Her new 5-song album features lead single, “Electrified”, which is a pop tune reminiscent of all the colorful fashions and fun in the ‘80s. The album showcases Megan’s unforgettable lyrics in a series of pop songs that will undoubtedly leave fans wanting more.

Go listen to her new album “Escape” today on Spotify!