ARTIST TO WATCH: Life of Dillon 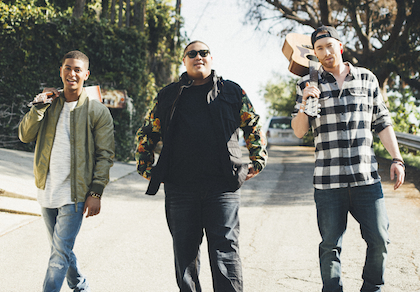 We have three words for you guys: LIFE. OF. DILLON! These three talented English lads (David Keiffer, Joe Griffith, and Rob Griffith) have officially boarded the M-Train, and you MUST go see them open up for Meghan Trainor in a city near you. Between “Overload” and “Dreams”, we can’t stop jamming, and we are sure you won’t be able too either. In fact, their whole EP,Prologue, is jam-worthy and couldn’t be more perfect for the season.

We talked everything with Life Of Dillon from how they got their name to who their musical inspirations are and more. Plus, find out which one of Meghan Trainor’s songs they will be performing on the tour!

YH: We can stop listening to “Overload” – such a great summer jam! What is the inspiration behind the song?

JG: It’s really just about that breaking point where you realize what you’re doing, even what you necessarily want to be doing, and change your focus. Nobody can stop that. Not you, not anybody; you know you’re going to end up doing what your supposed to do, and that’s the point in which you start overloading. That’s about it, it’s just a really easy, simple message!

YH: Tell us about where your band name comes from.

JG: We went to Brazil, where Robert and I were born, and we met this guy, Dillon, whose lifestyle was just amazing and really how we wanted to be living. He was free and did what he wanted to do – surfing and drinking on the beach – and that was completely unknown to us a week prior, because we were in England and working so hard for a whole year writing, and then we meet this guy that was living a lifestyle that completely matched the music we were making. We used to make these pictures of Paradise on the computer screen for a lot of our music, which is feel-good summer stuff, so then we meet someone whose lifestyle embodies that, and I think we were a tad bit jealous and just wanted that life for ourselves – that’s why we became Life Of Dillon.

YG: Explain the kind of sound each of you bring to the group individually.

RG: We all have different influences... Dave loves guitar music likeDave Matthews and John Mayer, and I’m more into Timberland, electronic music, hip-hop, and EDM, whereas Joe likes a lot of R&B stuff likeThe Weeknd and some Michael Jackson. So, we bring those three musical sounds together and get what sound we have – these acoustic house-driven rhythms with beachy sounds and cool musical vibes that’s feel-good, upbeat, and gets people dancing. Joe and I, being half-Nigerian as well, we have this African influence in there with African harmonies and beats. So, it’s just a combination of three very different tastes of music, and we all know how to compliment each other very well.

DK: We’ve known Joe for about 8 years, and when you’ve known someone and been working with someone for so long, you build this chemistry. I don’t know how songwriters do it when they go into a room and make music with someone they just met. It’s nice knowing each other for so long because we have so many experiences together, giving us so much stuff to write about.

YH: Congrats on touring with Meghan Trainor! That is so exciting. How have you guys been preparing?

DK: We’ve just been rehearsing loads and loads! We were studio rats for so long, so we're not really used to performing. Our first performance was amazing -- there was so much energy, and it was just such a great crowd.

JG: Yeah, and a lot of it has to do with getting comfortable on stage and having that interaction with the crowd... it’s easy to write and produce music, but actually being out there in front of a crowd is a whole other ball game.

YH: Which songs are guys most excited about performing for your fans?

RG: Definitely right now it’s all about "Dreams" – we’ve been getting a crazy response from it, and we’re seeing people singing along by the end before they even know the song, which is so great.

JG: We’re actually about to shoot the video for "Dreams", and were really excited for that – it will bring more artistry to it and will just really compliment the whole aspect of the song. Already it’s doing so well; I mean, yesterday, everyone was dancing to it and jumping around, and it was just fun, so much fun!

YH: If you guys could perform any of Meghan’s songs while on tour with her, which would it be?

DK: We got quite a few responses on our Facebook page about that, and we actually have covered one, and we’re going to release it, but I think we’re going to perform “Lips Are Moving” – that’s the one that we’ve gotten the most responses to on Facebook, so we want to do what the fans want for sure.

YH: What are you all most excited about when it comes to the tour?

DK: The fact that this is our first-ever tour! We are literally so used to being behind a computer screen. I mean, we’ve done some really small performances around our hometown and stuff, but nothing like this. We’re used to producing, but now we're actually getting out there and performing, and that’s definitely the most exciting part – actually getting to put these songs out there and perform them for people.

YH: Your EP is titledPrologue; why is that?

JG: I think we named it Prologue because (1) it’s just the beginning of what we're doing as Life of Dillon, and (2) we haven’t been performing; before, we were just going to be songwriters. Now, we're Life of Dillon, and we're touring America, so it’s really just the beginning. We were at a point where, if this wasn’t going to work, then we were all going to have to go find jobs and do something else for a living, so it was almost the end, and then we got connected with the right people, made the right moves, and it became the beginning.

YH: Which is your favorite song onPrologue?

JG: I don’t really have a favorite; they’re all so different. I mean, “Bluebirds” is more chill and the best if you want to mellow out, but if you want to party, “Dreams” is the one; it’s the most hype. So, right now, I would have to say it’s “Dreams”.

DK: At an early time of day for me, “Bluebirds” hits, and then in about three hours time, when I want to get hype, “Dreams” is it for me.

To top it off, we have good news, Life Of Dillon lovers and Megatronz:tour tickets are still available in various cities, and they want to see you there jumping up and down and singing along! Good vibes, great music, and good-looking gents (with accents – swoon!)… Yeah, we’re in!

Remember: If your dreams don’t scare you, they ain’t big enough!