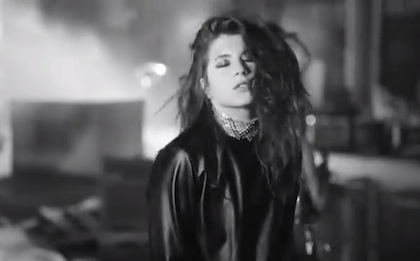 Although it would be extremely unfair and borderline sexist to categorize a band just because their lead singer is a woman, it would be even more unfair to ignore this fact when the woman in question is one of the more talented, vibrant, and up-and-coming vocalists in the young, indie-rock genre, regardless of gender.
Those of you out there who have had the pleasure to have seen Kitten live in concert recently know exactly why frontwoman Chloe Chaidez is hailed as the driving force for the success of the band, and although there have been more than a fair share of shake-ups in the lineup, the thing that does remain constant is her passion for performance, and her ability to put on one hell of a good show.
Based in Los Angeles, Kitten is currently comprised of Chloe and other bandmates Bryan DeLeon, Waylon Rector, and Zach Bilson, making for a remarkable foursome of musically-inclined indie mavens with a talent for good music. If you’re not really a rock-n-roll devotee when you first listen to them, you will definitely be a convert by the time you listen to a few of their tracks. And that’s coming from a fan who usually loves upbeat, pop music.
Some of their most popular and most likeable songs include “Cut It Out” and “Like a Stranger”, both shining examples of how pop-friendly, fun, and new-age indie music is nowadays.
Currently on tour and slaying it with another fave new band of ours, The Neighbourhood, Kitten is set to not only prove that women can rock too, but to also show that there is still always innovation and newness to be had when it comes to music, and that it doesn’t matter who you are or what convention dictates, but what you can offer to listeners and your fans.
(Screenshot via YouTube)
- Raffy Ermac, YH Staff