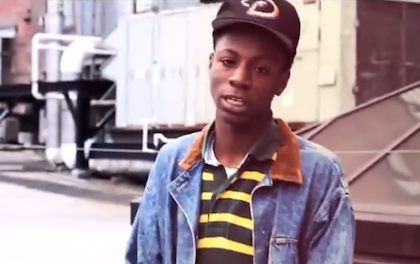 There’s a general rule of life when you’re a young person: you can’t call nickname yourself "badass" and not deliver. Luckily, Brooklyn native Jo-Vaughn Scott, better known by his stage name of Joey Bada$$, doesn’t have to really worry about not delivering; although it might smack of smugness, this 18-year-old up-and-coming, indie hip-hop artist has an impressive amount of talent and skill and has definitely earned the right to call himself a badass.

It’s hard to believe that Bada$$ is so young, especially considering the way he’s already so sure of himself and his craft and making his presence known in the hip-hop community, but after only being signed in 2010 to Cinematic Music (at the even younger age of 16), it’s a sure-fire thing that his maturity is working in favor of both his image and his music.

Growing up and going to school in New York City, Bada$$ was originally an acting student at Edward R. Murrow High School, but he eventually caught the rapping bug and made the easy (for the better) transition into the music game. Like every great modern rapper, you have to always represent your friends and your crew; Bada$$ also helped form the hip-hop collective known as Pro Era with other blossoming artists such as CJ Fly, Kirk Knight, and A La $ole.

After a freestyling video of himself surfaced on YouTube in 2010, and after being signed, Joey released his acclaimed debut mixtape 1999 – the likes of which include the hits “Hardknock” and “Waves”.

Some other tracks from earlier this year’s mixtape Summer Knights include “Hilary $wank”, “My Yout”, and “9-5 ‘Til Infinity”.

On the cusp of a mainstream rap career breakthrough, this surely isn’t going to be the last we hear of Joey Bada$$!