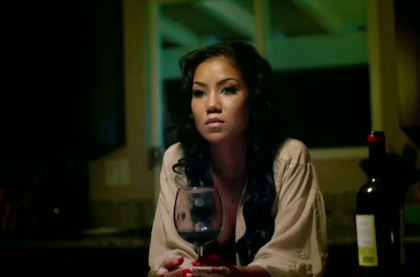 If you caught Drake’s episode of "SNL" back in January, then you saw his performance with a very beautiful and talented female vocalist. Who is this entrancing female you ask?

Aiko is slowly invading the R&B and hip-hop circuit. She certainly is not a rookie to the music industry, however. In 2002, she debuted as the cousin of Lil’ Fizz (from the musical group B2K); although they weren’t really cousins, they grew up together and were close enough to be like family. She contributed vocals to many of B2K’s songs on their albums as well as being the opening act on their tour. She has also been featured on plenty of music videos.

She also has songs on soundtracks like Barbershop and You Got Served. After being released from her label, she decided to focus on her schooling but made her return to music. In 2011, she released a mixtape, "Sailing Souls". The next year, she signed with Def Jam Records and released “3:16AM”.

Her voice is soothing and subtly soulful. This song would be the first single from her album Sail Out. In the same year, she opened for a concert tour that headlined artists like Nas and Lauryn Hill.

In 2013, she was featured in Big Sean’s song “Beware”, which blew up on the U.S. Billboard Charts.

Late last year, it was announced that she would be touring with Drake after collaborating with him on a few of his tracks, including “From Time”, the song which they performed on "SNL" earlier this year.

Aiko has been busy working on her own album and collaborating with huge names like Childish Gambino.

Her beautiful voice and style of writing lyrics is something new and intriguing for female R&B artists currently.

Here’s one of her newest singles.

Keep an ear out for the name Jhené Aiko, because I guarantee that this is not the last you’ve heard from her!