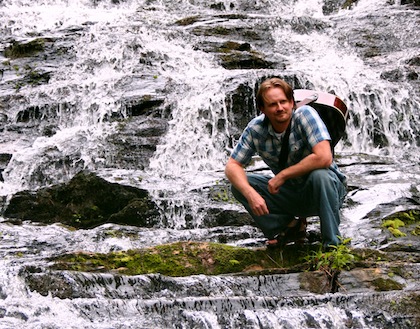 You probably don’t often link hip-hop, folk, and electronic styles together, at least when it comes to music-making. Jason Garriotte, however, believes they mash up quite nicely, and he is demonstrating that through his brainchild Chords of Truth where he serves as vocalist and guitar player.

In 2011, Garriotte recorded the EP “Reflections of Reality”, which was of the acoustic variety. He did some touring and then decided he wanted to start collaborating and make something even bigger, which led him to communicating with other artists and eventually linking up with the electronic music world.

Cas Weinbren, a producer who is know as “The Chameleon”, was brought on to do the collaboration project, and artistMan-u-iLL joined in for the hip-hop portion, which makes an entrance in the song “The Power to Be Alive”. The result of the style blend has been called “acid-folk”, and it’s unlike anything you can currently find on the radio, so you have to take a good listen to really get the feel of it.

A lot of times, a joint-style song becomes a new genre of music all of its own by distancing itself from its association with its origins, but interestingly, Chords of Truth doesn’t over blend in that manner. Instead, the music entirely preserves the integrity all the different styles in the same place. Garriotte’s voice is not turned electronic alongside the music, so it’s still clearly folk over the uptempo beats.

“Reflections of Reality (The Chameleon Acidfolk Remix)” has five songs that stick to this theme of remixing without letting anything fall by the wayside. Garriotte’s folk style is vocally traditional and the electronic element takes the music in a whole other direction... otherwordly, if you will.

The music has a clear focus on what makes the world go ‘round, with lyrics like: “It’s a mystery what separates us”, “Use your attention with intention / If you are clear it will appear”, and other ideas that might get you doing some deep thinking about how you approach the world. Don’t say we didn’t warn you.