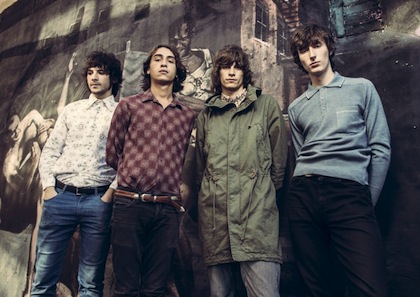 With a sound reminiscent of The Black Keys mixed with The Rolling Stones, Hidden Charms has taken the U.K. by storm. PLUS they’re British, so what's not to love, right?

The band, comprised of London natives Vincent Davies, Ranald Macdonald, Josh Lewis, and Oscar Robertson, has now set their sights on North America, and we couldn't be more excited!

With the creative mind of legendary producer Shel Talmy, and with support from BBC Radio 1, BBC Introducing, and XFM, the boys are getting ready to drop their first EP, which will debut in North America later this year.

But first, if you want to get a better sense of what to expect from their new music, check out their single “It’s Time” below!

Their style definitely puts you in mind of of late-'50s and '60s-era rock and roll, and it has already made huge waves overseas. Check out the band performing on BBC Radio 1 here.

If you like what you’ve heard so far, make sure to grab tickets to their show on February 19 at The Lyric Theatre in Los Angeles!