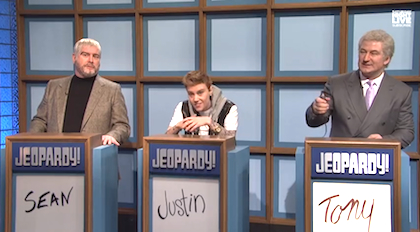 I remember riding in a car with my friends as my mother drove us to our first time seeing an R-rated movie in theaters. “Boobs and Will Ferrell!” we kept screaming. (It was a proud moment in mom’s career as a mother.) There are plenty of people to talk about from SNL over the years, and, to be honest, nobody really stands above the others because they’re all just so talented. Everything going on during SNL’s 40th anniversary could be written about, but I have to mention Will Ferrell and Darrell Hammond in "Celebrity Jeopardy", because for me and my friends watching SNL, there was nothing funnier than Ferrell as "Jeopardy" host Alex Trebek and Hammond as Sean Connery warring against each other for years.

Sure, you can go against me and say there’s a single SNL sketch better than some of the "Celebrity Jeopardy" sketches, but the thing is that SNL consistently produced some of their best stuff ever with "Celebrity Jeopardy". It’s got everything we want to see in a sketch -- Connery hating and fighting with Trebek for no apparent reason, spoofs of your favorite (and maybe not-so favorite) celebrities, and just random goofy moments that make you say “Wait? What?”, which ultimately makes life more tolerable. For SNL’s 40th anniversary specia,l they brought out everybody they could for another round of "Celebrity Jeopardy", from Sean Connery to everybody’s new favorite impression of Justin Bieber by Kate McKinnon to an old favorite of Norm Macdonald (who also created the segment) as Burt ReynoldsTurd Ferguson.

As you can see here, a lot of people showed up for "Celebrity Jeopardy". My favorite appearance is hands down Jim Carrey as Matthew McConaughey. Once again, Carrey delivers a spot-on impersonation of the McConaughey we saw in those Lincoln car commercials not too long ago and still continue to see. But, once again, Connery steals the show with his unknown need to absolutely fudge with Trebek’s mind hole like it’s his right to do so. And we finally got somebody to ask the “Potent Potables” question! But, as expected, we didn’t get a clear picture of what it was. Oh well. There’s always the 50th anniversary to look forward to...

SNL 40 aside, I have to say, it took me a while to realize something about "Celebrity Jeopardy" -- Overall, the most impressive part of it is that Ferrell as Trebek shows us something that we are not entirely used to seeing Ferrell do, which is play the Straight Man. It takes a lot to suffer all of that verbal abuse and uncalled-for remarks about how Connery made his mother say “Moo”, but Ferrell has always pulled it off like nobody’s business. It’s strange that we never have really seen him do it anywhere else, except maybe in one of my favorite SNL sketches over the years, and it’s even got Buffy the Vampire Slayer in it! Take a look:

Now that you’ve seen one of my favorite SNL sketches, what are some of YOUR favorites? Leave a comment below!