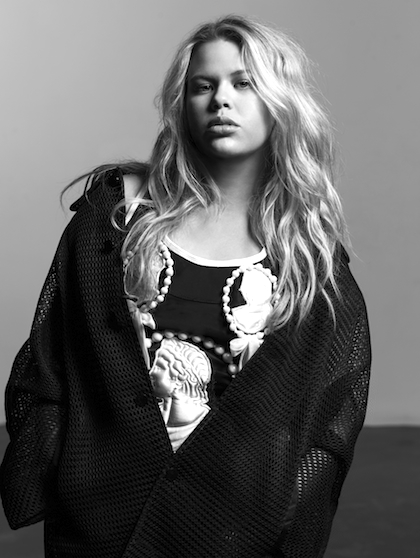 Make way for yet another Aussie superstar: solo-artist Grace has graced us with her presence (pun SO intended)!

This lovely young singer, who goes by her first name only, is certainly revamping the current music industry, reminding us of a young Amy Winehouse with her rich soulful voice.

You may know Grace from her edgy single, “You Don’t Own Me”, which went #1 in her native country, but the song is actually a remake of Lesley Gore’s original track from the 1960s  Grace added her own spin to her version, adding G-Eazy to the song for a little rap action.

We had the opportunity to ask this up-and-coming artist some questions about working with the legendary Quincy Jones, her new album, and who her favorite fellow Australian is!

YH: Your first single with RCA Records is a remake of Lesley Gore’s song, “You Don’t Own Me”. Did the lyrics resonate with you at all?

G: Yeah, when Quincy brought the idea to me, he explained to me how big a deal it was when it came out in the '60s. She [Leslie] was my age when she did it, and for a young lady to come out during that time and say those kind of lyrics was a big deal. So, that drove me a lot to it; to be that voice for a new generation and hear that message.

YH: You wanted to be a voice for young girls… like self-empowerment?

G: Yeah, for sure. I think it’s a timeless message, and it’s definitely a message that needs to be conveyed to a new generation.

YH: How do you think you put your own spin on the song?

G: Well, obviously, the producers that worked with me to make it happen were a big part of making it sound fresh and young. G-Eazy was another part of making it cool for the younger generation and giving it that hip-hop element, but much of the classic elements from the original are still in there. It was just a balancing act.

YH: Speaking of G-Eazy, what was it like working with him?

G: It was great to work with him. He’s amazingly talented and such a great guy. We were in Atlanta when he heard the record for the first time, and he was working in the studio… We kinda ran in the same circles by affiliation, and he heard the record and thought he would be the right fit.

YH: You’ve worked with some crazy awesome people, like Quincy Jones, who was one of the producers on both yours and Lesley’s versions of “You Don’t Own Me”. Tell us more about that experience!

G: I mean, it was incredible, obviously, to work with someone with so much history and a legend… I learned a lot from him.

YH: What artist when you were growing up inspired you to sing? Were you listening to Australian singers? Pop stars in the U.S.?

G: My nana and pup used to sing when I was growing up. My mom used to play a lot of soul and Motown. I grew up with listening to Smokey Robinson, Gladys Knight, and Aretha Franklin, so big soul voices… I love Lauryn Hill now and Amy Winehouse, so that is where the inspiration comes from.

YH: Speaking of Australia, I feel like Australians have been killing it in the United States over the past decade. If you were to pick a favorite fellow Aussie who is also in the entertainment industry, who would it be and why?

G: Oh, that’s a tough one. I love Goyte. Lorde, of course, but she’s from New Zealand. There are a lot of great people coming out at the moment.

YH: So, tell us more about your new album, the process of making it, and if you were able to write any of the songs yourself?

G: All of the songs are collaborated or written by myself. Since the EP came out a couple of months ago, we have just been in the studio trying to get as much done as possible. It’s kind of like an extension of the EP but a little bit more grown-up I guess. It’s shaping up nicely.

YH: What would you say the tone of the album is and how it differs from the EP?

G: I mean, it’s still in the same vein. It’s going to sound like me, but content-wise, I’m developing. I’m developing as a writer as well because I’m growing up. The content might be more complex.

YH: I know that your brother (Conrad Sewell) is also a talented musician, so is there any chance for a collaboration with him in the future?

G: I would love to be able to work with him in the future.

G: He lives in L.A… but we are constantly crossing paths. We kind of have the same schedule; it’s funny.

YH: Your fan base is awesome; it’s growing by the minute. Do you have a message or shout-out you’d like to give to your fans? Anything you would like to tease?

G: I’m doing the “TODAY Show” on [July] 28, so everyone tune in for that! And just keep supporting the music and spread the word. Thank you so much for supporting it and being there and liking it!

Make sure you look out for Grace's new album! If you haven’t heard her EP yet, download Memo ASAP! I can’t stop listening to “You Don’t Own Me”.

P.S. -- Grace says her fan-base still doesn’t have a name… so, to all the Grace fans out there, get something trending! #Gracers? #Gracies? #GreatestGracies? Think about it and tweet us your faves!