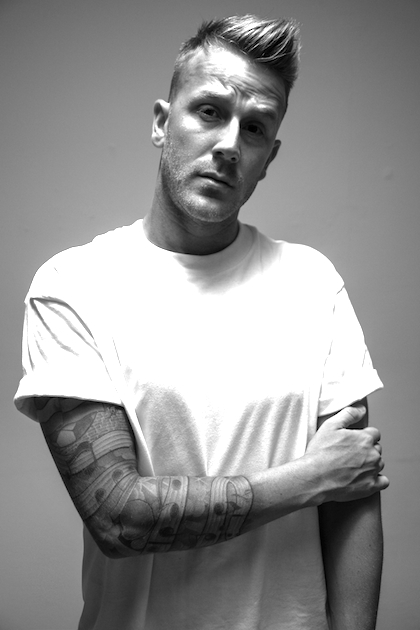 Calling all lovers of singer/athletes with blonde hair, blue eyes and tattoos -- Allow us to introduce you to Devin K!

Devin K is making his mark in Hollywood as an up-and-coming artist, and he’s only been in the biz for three years! A newbie but goodie.

Devin K worked with Capitol Records producer Jason Mater on his debut EP "Rendezvous", and his first single, “Back to LA”, caught the attention of Power 106. The EP did so well that it went international, and the tracks were picked up by major retailers such as H&M, Nordstrom, and Hollister & Co.! Devin K has also worked with major producers such as BattleRoy (Bruno Mars, Eminem, Demi Lovato) and Paul Couture (Iggy Azalea, Pitbull, Shwayze)... NBD, right? On TOP of that, he has written for artists such as Cody Simpson, Jordin Sparks, and Jason Mraz. His fierce love for soul and hip-hop music landed him a feature appearance on "Ms. Fortune" , Swayze’s summer 2013 release, which ended up reaching #6 on iTunes hip-hop charts! He’s toured with Shwayze and performed alongside Kendrick Lamar, LL Cool J, and Ashanti. Fans loved him so much that he held a six-month residency at Hyde at The Bellagio in Las Vegas! Devin K’s most recent performance was at KOST 103.5 FM’s Holiday Concert Series at L.A. Live this December. Not too shabby for a dude that’s only been in the industry for three years; super impressive!

Check out his newest music video, "Move", which is premiering EXCLUSIVELY right here on YH!

And peep these other offerings from Devin -- a cover of and "Hold On We're Going Home" and his original jam "Back to L.A.":

Amazing, right? But did you know that he’s also an athlete??

Born and raised in Long Beach, California, Devin K signed a professional contract straight out of high school (nice!) to play for national soccer club Red Bulls. His evident charisma grabbed the attention of international mega-brands and he became a traveling endorsement. He eventually left the game of soccer and focused on his true passion for performing, but he still went on to host events, perform music, and showcase his athletic skills to crowds of up to 100,000 people alongside major brands such as Nike, Red Bull, Budweiser, Chevy, KIA, and Cheetos!