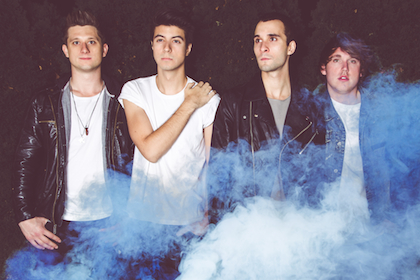 If you haven’t heard of Action Item, then you need to get yourself to YouTube and take a listen!

Action Item is a four-man rock/pop band from New Jersey consisting of Brian Cag, David Buczkowski, Anthony Li, and Dan Brozek who came together in 2008 and have been working hard on their music and perfecting their special sound. And after a number of EPs and albums, they don’t plan on slowing down any time soon!

They released their newest EP, “Great Mission:Life”, earlier this month -- check out their first single from the EP below!

Action Item explains that this EP “focuses on things we have learned or experienced after being on the Earth for 20-something years, it was definitely a labor or love, and we feel our fans will really connect with the new music, which is a great showcase of how the band has evolved over the last few years.”

It’s obvious in their music that they have put their heart and soul into this EP, and they want to share it with the world. They are definitely getting their chance to do just that!

This summer, along with their EP release, Action Item is currently on tour supporting MKTO! Action Item says that they “are honored that [MTKO] wanted to take us out on their first American, headlining tour. This entire show is bound to be wild.” The U.S. tour will visit over 30 cites. The band has also toured with artists like Hot Chelle Rae, Owl City, Andy Grammer, and Selena Gomez as well as playing festivals like Warped Tour!

But, their success didn’t happen over night. Action Item has been slowly climbing up the success ladder, if you will, with their previous album, Resolution, making the Top 10 on the Billboard Independent charts. Not to mention their music video for their single, “Last Day of Summer”, hitting number one on MTV.com.

They also collaborated on a YouTube video with the very talented YouTuber, Kurt Hugo Schneider, featuring their single “Brave”. The video reached well over 750,00 views!

See if Action Item will be touring near YOU below!