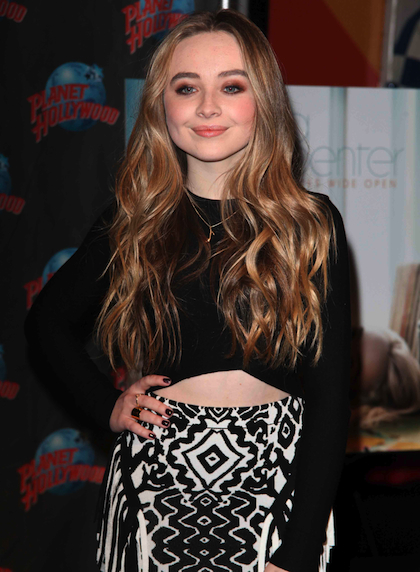 You all had better keep your “Eyes Wide Open” for breakout star Sabrina Carpenter!

Sabrina Carpenter, whom you might know better as Maya on The Disney Channel’s "Girl Meets World", has blown up since the show first premiered late last year!

Sabrina got her first acting gig in 2011 on "Law & Order: SVU" at age of 12. She continued to get small acting roles in "Austin & Ally" and "Orange is the New Black" (as Alex's stuck-up childhood frenemy Jessica), and she even lent her voice to animated shows including "Phineas and Ferb" and "Sofia the First". But the voice acting isn’t any surprise.

Before she began her acting career, Sabrina has always been involved in music. She started singing and performing at a very young age!

Sabrina has come a long way since then, developing her voice and emotion behind her performances. But even then, Sabrina exemplifies a maturity and elegance to her voice and demeanor. Like her Instagram bio says, she is an old soul; she’s covered songs like “Rumor Has It” by Adele, “Sweet Child O’ Mine” by Guns 'n' Roses, and “You Raise Me Up” by Josh Groban.

Even thought Sabrina is only 16, her voice and presence go beyond her years!

Earlier this year, Sabrina won a Radio Disney Music Award for her single “Can’t Blame A Girl For Trying” for Best Crush Song.

In April of this year, she released her first album Eyes Wide Open where we can really see how Sabrina has grown in her music and style.

Ms Carpenter even showed off her talents in the YH studio earlier this month!

I would keep my eyes and ears out for this breakout singer, actress, and fashionista, because this is only the beginning for this talented young woman!

Get a peak into Sabrina’s life and fashion styles on her Instagram and be sure to check out her official website!