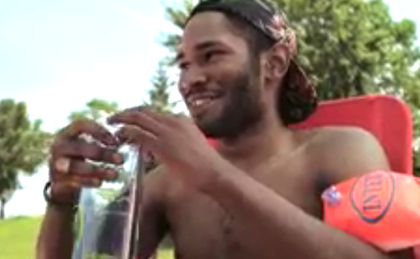 Also known as Louis Kevin Celestin, Kaytranada is a Haitian-Canadian music producer and DJ born in Port-au-Prince, Haiti, but was raised in Montreal, Quebec. At the young age of 14, he started DJing and not a year later started producing his own music.

In 2010, Celestin made his debut releasing eight projects and later changing his name to Kaytranada in 2012. Since then, Kaytranada has been busy producing and remixing as well as touring all over the world and making his way into the music scene playing major festivals.

It’s his chill house vibe that had me getting into his music and listening to his remixes on repeat.

“If” by Janet Jackson Remix:

You can check out Kaytranada at Day 1 of FYF festival this year on August 22. (You can also catch Deerhunter, Thee Oh Sees, Death Grips, Savages, and Frank Ocean at FYF!)

For more Kaytranada music, check him out on SoundCloud!