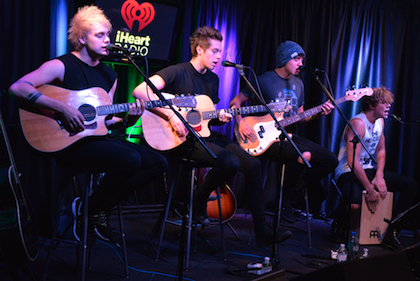 Fittingly enough, the newest boy band taking over the music scene this summer calls themselves 5 Seconds of Summer, AKA 5SOS.

Have you heard their chart-topping hit? I am almost certain that you have and that it’s been stuck in your head the past few months.

Here it is, just to remind you.

This pop/rock/punk Aussie band -- yes, I said Aussie band -- started off, as so many do nowadays, posting covers on YouTube. They got the attention of music labels and producers, but it wasn’t until Louis Tomlinson and Niall Horan of One Direction started posting up their videos. They continued to write and make music, and in 2013, it was announced that they would be joining 1D for their Take Me Home Tour.

This was just a taste of all the fun and pranking that I can imagine happened while the two bands were on tour together, like taking on a enormous cheeseburger...

Aww, look at them, eating a burger with a fork and knife. So cute.

But the band isn’t all about fun and games. They have their share of ballads too. Check out the video for the latest single, “Amnesia”:

The band just won two Teen Choice Awards, and I’m sure that their popularity and success is destined to last more than just 5 seconds. They will be touring around North America in 2015.

For news, merchandise, and tour details about  5SOS, check out their website!