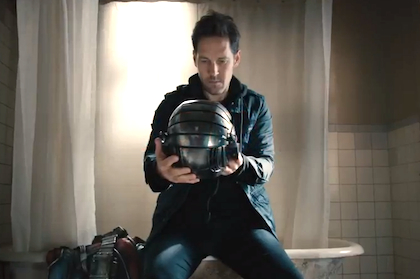 Oh Ant-Man. You’ve had quite a tough time, haven’t you? People have been wondering about you since an Avengers movie was first hinted at, and for a short time, Ant-Man fans around the world were left to ponder their place in the cosmos. And then, all of the sudden, Edgar Wright, one of the most visually-gifted directors we have working today, was announced as the director of a 100% Marvel-approved and USDA Certified Ant-Man movie. The crowd roared with approval, and then, months later, whimpered with disapproval when Edgar Wright stepped down from the project. But it was quickly rescued by Peyton Reed, the man who gave us Bring It On and quite a few episodes of "The Upright Citizens Brigade", and fans were once again assured that their ant-based dreams would be fully realized. A rocky production history aside, you’ve got to admit that the cast (Paul Rudd, Michael Douglas, Evangeline Lily, Corey Stoll, Bobby Cannavale, Judy Greer, to name a few) is pretty on fire. Well, now is the time for this cast to burn! Or something. Just watch the trailer.

What can we deduce from our little trailer here? Well, they’re still kind of keeping things close to their chest it seems, as we are being gifted very little information outside of what we have come to expect from superhero movies. He’s an outsider, there’s a mentor, a woman proves she is strong by hitting someone, the hero revels in his powers momentarily, the bad guy is revealed to be a sort of anti-version of the good guy, and more action scenes than you can fit into 10 overly large ant hills. The special effects here are pretty dang impressive, and it looks like the film is going to get a lot of mileage out of the whole size comparison bit. This is of course essential for an Ant-Man movie, and the joke at the end of the trailer is pretty cute. Let’s hope the film has something in common with Thor when it comes to comedic timing and how to blend it with the dramatic urgency. Again, there is only so much we can tell from the trailer, but Rudd and Douglas seem comfortable enough in their respective roles, and I have always applauded that casting since the every beginning. Corey Stoll is also featured here as Darren Cross, who will eventually be revealed as the villainous Yellow Jacket. And, of course, the one thing that can kill an ant is a yellow jacket. Well, that and a spider, a scorpion, poison, a shoe, a hand, a strong gust of wind, rain, and high anxiety. But other than those things, the one thing that can kill an ant is a yellow jacket.

Marvel is at the top of their game right now. They know how to make these movies, and they are going to be doing it for quite some time. Ant-Man is particularly important because he is one of the core members of The Avengers. But, much like the character of Scott Lang, Ant-Man is an outsider when it comes to the Marvel Cinematic Universe, and it will be interesting to see how they fit him in. It has long been rumored that, by the time we get to the final Avengers film, that the roster will be completely different. We’re about to meet Ant-Man in a few months, as well as Black Panther, Captain Marvel, Doctor Strange, and (new) Spider-Man further down the road. The show is about to get started once Avengers: Age of Ultron hits theaters next month, but it looks like the after-party is going down over at Ant-Man’s place. So, keep you eyes peeled for more Marvel goodness and check out Ant-Man when he hits theaters July 17.