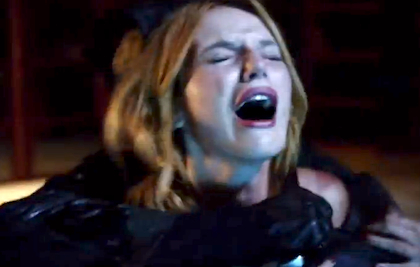 With all these remakes and reboots going on the small screen, it was only a matter of time before somebody realized an iconic slasher flick could be made into a television series. Enter MTV with their idea to bring Wes Craven’s Scream series to a new generation on TV. Assuming you haven’t heard of Scream before, it is okay, because aside from the stretched out ghostly masks and all black outfits, the show will not be a direct continuation of the movie series, so as far as we know, Neve Campbell and Courtney Cox won’t be showing up. Instead, it will follow the affects the spree of murders had on the sleepy little suburban community nearly twenty years later. Let’s take a look at the trailer:

“You can’t do a slasher movie as a TV series. Slasher movies burn bright and fast. By the time the first body is found, it’s only a matter of time before the blood bath commences.” Well, let’s hope whoever that guy is that is playing the Jamie Kennedy-type character from the original Scream series is dead wrong! That was quite a bit of blood and reaction from people seeing corpses for a trailer, but hey, it’s cable TV! “Scream” will star Bella Thorne and will premiere on June 30.

You may be asking yourself, It was nice and all seeing all the gore and people die, but what the heck is the actual plot? As stated above, this follows the same community from the original Scream movie nearly twenty years later. Memories of the killings from the original Scream are stirred up again when a cyber-bullying incident leads to another murder. The reaction to these memories is different from resident to resident. For some people, the killings have haunted them; others that were more removed from the incidents have been intrigued by them, and it wouldn’t be a show if this didn’t inspire at least one new killer. Considering the movies never featured a lone killer, it is safe to say that it will be a tag-team job for the show as well. It will follow a group of teenagers (of course, it’s MTV) as they combat their usual high school social issues with each other, while some may be suspects, some will be victims, and others might be the killers.

This sounds like an interesting set-up to me. As that Kennedy-type of guy said before, “You can’t do a slasher movie as a TV series.” Given that they have called themselves out on this one, I can’t wait to see if they can pull this off or not. So, join me on June 30 to slash through the first episode “Scream”!