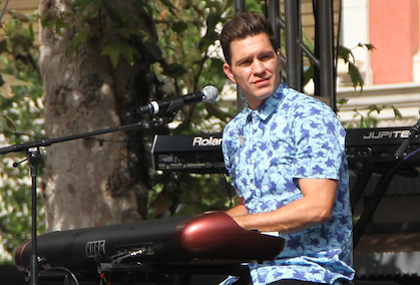 If you guys believe in true love, then I know you’ll fall for this adorable music video!

S-Curve recording artist Andy Grammer is killin’ it right now. Grammer’s popular hit, “Honey, I’m Good”, has reached over 1.5 million streams on Spotify and was added to SiriusXM Hits 1! What a better way to celebrate this success than with a video that celebrates true love, right?

“Honey, I’m Good” is the current single from Grammer’s debut album, Magazines or Novels, which scored in the iTunes Top 5 Album charts! The album was released in August and includes 12 new songs all written or co-written by Grammer. He got to perform his first single, “Back Home”, on "The Today Show" and "Good Morning America". He’s so deserving of all of this exposure, since 2 billion tracks of his other smash-hit single, “Keep Your Head Up”, have been sold to date. The talented and elite artist will also appear on the "Fox & Friends" Christmas Show, which airs on both Christmas Eve and Christmas Day!

This super cute and charming video was crowdsourced through Andy’s social media accounts and features a wide range of couples showing their true commitment to each other (swoon). It’s so refreshing to see, since monogamy seems hard to come by these days. All of the couples sent in self-made videos, holding up signs of how many years they’ve been in monogamous relationships, ranging from 1 to 72 years (aww!). Joining Andy and his wife are some other notables including Natasha Bedingfield and her husband, Alex & Sierra, actor Colton Haynes (who makes a cameo as a “third wheel”), the couple married on stage at the Grammys by Madonna with Macklemore, and a couple who had their first meeting at one of Andy’s live shows (so creative, I love it).

Check it out below:

If you can’t get enough, don’t fret. In February, Grammer will set out on 27-city a co-headlining tour with Alex & Sierra and opening act Paradise Fears! VIP Tickets go on presale on December 15 with General Admission tickets opening up on December 20. The tour kicks off in Seattle, WA, and wraps in Andy’s hometown of Los Angeles on April 3.

The tour dates are as follows:

In the meantime, you can obsess over him by visiting his website and following him on Facebook, Twitter, and Instagram! Also be sure to check out our chat with him during his gig at The Grove in L.A.!