An Ode To Chewbacca: The Wookie's 3 Greatest Achievements 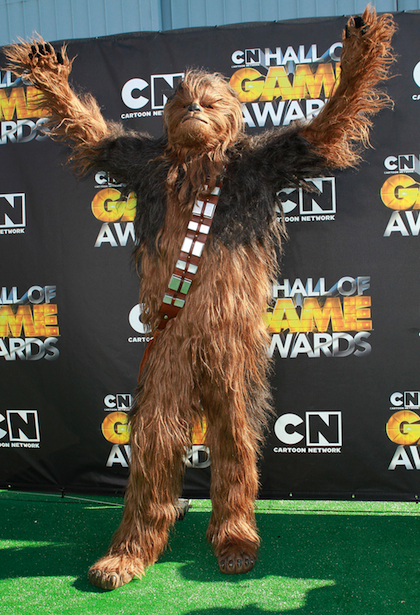 In honor of the trailer for Star Wars Episode VII: The Force Awakens being released today (during the previews before Big Hero 6), I would like to play homage to one of my favorite Star Wars characters: Chewbacca. When you think about it, Chewbacca is the ultimate bro. He never leaves Han Solo’s side, and the two share what may be the greatest bromance in cinematic history. Chewbacca may not be able to say much beyond his signature growl, but he is always there for you, no matter what happens. Star Wars just wouldn’t be complete without everyone’s favorite wookie.

Thus, I have decided to chronicle some of the greatest honors that Chewbacca has received:

1. Chewbacca was the star of the Star Wars Holiday Special. Although it only ever aired once, it may have been the strangest and most glorious piece of film to ever attach its name to Star Wars. In the special, we get to meet Chewbacca’s family -- he has a wife, Mallatobuck (obviously a great wookie like that would be married), a son, Lumpawarrump (that’s a mouthful), and the leader of his tribe. Chewbacca is spending “Life Day,” with his family when he and Han Solo are pursued by agents of the galactic empire who are looking for members of the rebel alliance (of course they save the day). Even though the special did not receive the best reviews, it did introduce us to the great Boba Fett, and we learned that Chewbacca’s son has a nickname: Lumpy. How can you not love someone who nicknames their child “Lumpy”? (It turns out that the whole special is on YouTube. Here’s the first part.)

2. There is a musical mashup between Chewbacca and the early-'00s band Hoobastank that is known as Chewbastank. Upright Citizen Brigade’s Dan Chamberlain removed lead singer Doug Robb’s vocals to “Crawling in the Dark” and replaced them with Chewbacca’s beautiful dulecet tones. I personally prefer Chewbastank to Hoobastank. So, if this is a success, perhaps Chewbacca will soon become a rock star. You can listen to the song here.

There are just some of the reasons why Chewbacca is the greatest wookie that ever lived. And, thankfully, Chewbacca will make an appearance in the next Star Wars film. Hopefully we’ll get a peek of him in the preview!