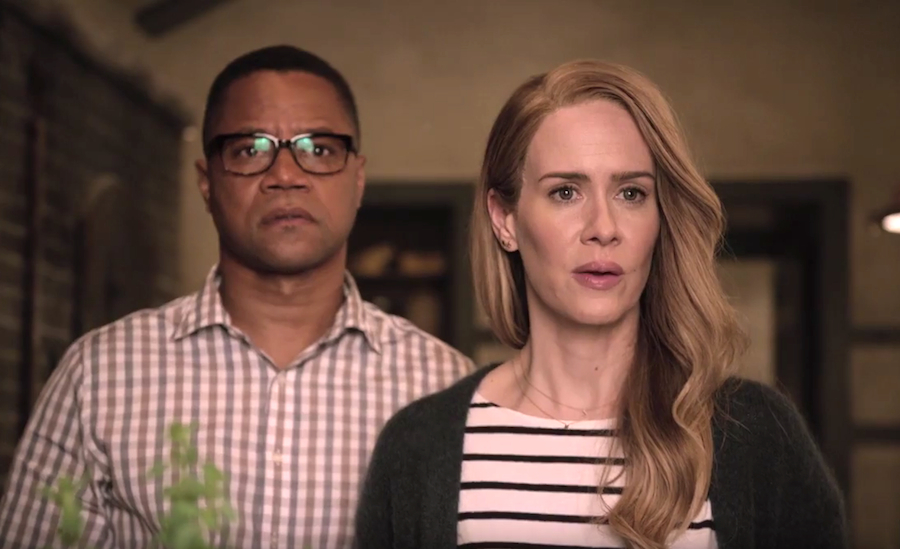 We knew going into Season 6 (or ?6) of “American Horror Story” that they were going to be doing something different – starting with not revealing what the theme of this season would be – but I don’t think any of us quite expected this!

Last night, the FX anthology series finally premiered, poised to answer all of our burning questions! But if you’re like me, you likely have even MORE questions now than you did before the episode aired!

This season finds Ryan Murphy taking on a different format altogether. Instead of a straight narrative, the show seems to be playing out like one of those “IT HAPPENED TO ME!” paranormal/true crime docu-series that you one would see on the likes of NatGeo or SyFy or ID or any of those other basic cable channels, where everyday people recount scary encounters with the Unknown as actors re-enact their experiences. The episode opens with a couple, played by Andre Holland and Lily Rabe, being “interviewed” about an experience they had in a creepy North Carolina farmhouse that they recently bought. Their story is then "re-enacted" by two other actors, Cuba Gooding Jr and Sarah Paulson, and plays out for us in typical “AHS” fashion. Meanwhile, the episode also features docu-series-type graphic bumpers entitled “My Roanoke Nightmare”.

The episode ended on a cliffhanger, which suggested that we’ll pick back up with “My Roanoke Nightmare” next Wednesday night. But because this new format is meant to mimic a weekly docu-series, I couldn’t help but wonder if we would get an entirely new story and (double) set of actors presented to us next week, that we would never know what really happened to Shelby in the woods that night that she was surrounded (obviously she lives, otherwise she wouldn’t be able to tell the tale), and Murphy would leave it up to us to fill in the blanks, turning this anthology series into an anthology season. It would certainly jive with the mish-mash of imagery in the teasers and promos that were released, right? Otherwise, what is the point of the confessionals other than just a gimmick? Why not just present the story to us as a linear(ish) narrative like usual?

Well, according to the latest promo for AHS 6, we will indeed continue to follow this same storyline, making "My Roanoke Nightmare" the root of Season 6's story arc:

Tweet us to let us know what YOU thought about the episode and the new format!