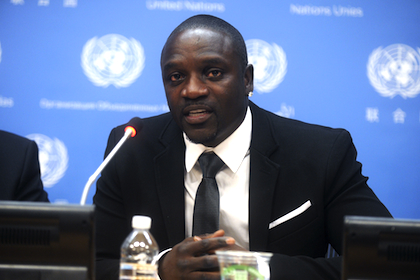 Akon appeared on the scene back in 2004 with his hit single “Locked Up”. It’s a catchy street song that got the majority of his fans on board. Just like any other artist, Akon had a platform he wanted to launch -- making Africa a better place to live.

He started campaigning for Africa back in 2006 when he founded Konfidence Foundation. Not only does this organization increase public awareness of Africa’s conditions, it provides educational materials, recreational resources, and health services to Africa’s youth. Last year, Akon put on a fun and interactive concert called "Peace One Day" to promote Peace Day at the Goma Airport in the Democratic Republic of the Congo. It was a very creative way to spread the word. Akon uses his talent to provide entertainment as well as a gateway to inspire and change the way Africa functions.

"Lighting Africa" is his newest campaign to bring solar power to Africa. This movement all began because three fine men -- Akon, Thione Niang, and Samba Bathily -- decided to push the support of African growth and to continue to motivate their youth. This initiative allows Akon's team to go around African neighborhoods and install tailor-made solar energy systems through public and private partnerships. Akon believes this is the pathway out of poverty for the continent. This campaign has already lit up over a million households in fourteen different countries. Bringing light to Africa is not the only objective Akon has, but he has a system that will continue for years to come. He’s introduced the Solar Academy in Bamako, Mali’s capital, to pass on the information to Africa’s engineers on how to continue building solar equipment for the continent.

“The power to empower people; that is our objective.” -- Akon

If only there were more artists that used their platform to not only entertain but to inspire the world. Good job, Akon!