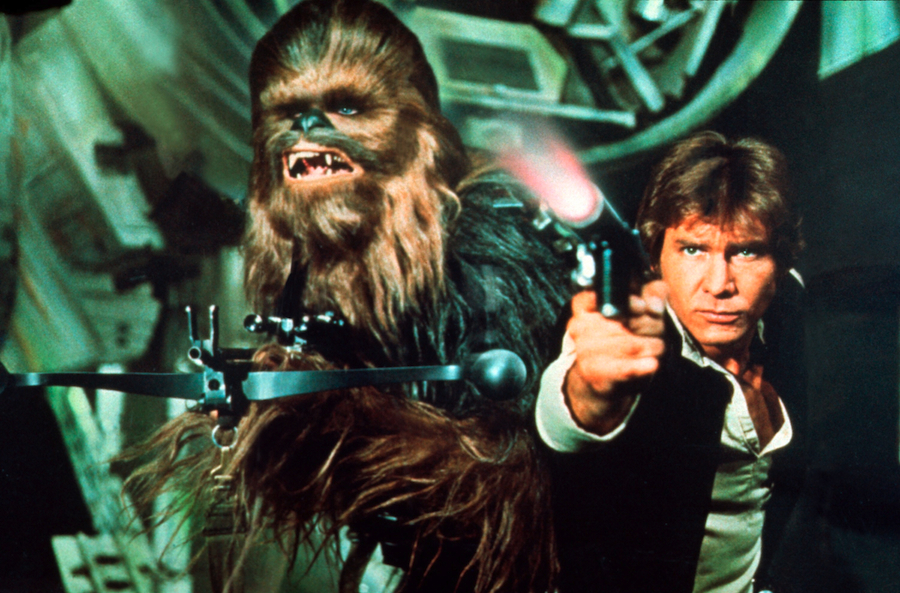 If you even have a minimum interest in Star Wars, you already know that, in addition to the new trilogy, three spin-off movies are in the works, including the still-being-casted Han Solo stand-alone movie, a movie about Boba Fett, and, what looks to be freaking amazing, the first-ever heist movie set in the Galaxy called Rogue One. Taking place before the events of A New Hope, Rogue One will show us how the crack team they assembled took the plans of the Death Star, which ultimately exposed the conveniently-placed air vent that can blow up the whole thing.

Information on the planned spin-offs aside, the real question is: are these enough?? Well, in the past, there was “The Clone Wars” on Cartoon Network, and now “Rebels” on Disney XD, but cartoons aren’t for everybody. So, overall the answer is “Heck NO!” They need me over at Disney or LucasArts or wherever they’re making these decisions today, because I know exactly where they’re missing the mark… so let’s see what more they could be doing!

Number one on my list is that the Star Wars universe is seriously missing out on having a sitcom. No, I’m not talking about trying to pair up the comic team of R2D2 and C3P0 -- there’s a reason why the last movie had little C3P0, and why Han Solo always wants to shut him off. Now if only they could make a show like “Cheers”. That show about a bar was #1 for such a long back in the '80s and is considered one of the seminal sitcoms of all time… but where could that happen for Star Wars? The Mos Eisley Cantina, of course! In A New Hope, we see almost immediately what this place is all about: heavy drinking, hardcore violence that everybody turns away from and ignores, and racism against droids. It’s got all the elements of a classic sitcom where we could explore a bigoted owner, like Archie Bunker of “All in the Family”, just trying to make an honest living and not get killed at his job. Not to mention the regulars look like a lot of fun too and could potentially have rich backstories, or a nagging spouse at home that won’t have sex with them. Too many sitcom tropes to explore here.

Who doesn’t like Def Poetry Jam? I know I do! So once in a while I would love to hear the bleeps and boops of the discriminated and down-trodden serving class of the Star Wars universe. Lay it on me, my mechanical brothers and sisters! Beep your woes of getting thrown out of bars because you’re different! Boodily-bop to me how you’re stuck in the crossfires of a war that won’t affect you anyway! Your real battle is on your day-to-day and goes against your owners who can unplug you at any time. Unlike you, I’m all ears, because you have something better than ears -- mechanical ears. And maybe, just maybe, you have a heart, because despite your gears and wires and mechanical shells, you’re just like us.

We all know about the tabloid show “TMZ”, but what do we not have? A tabloid show for the world of Star Wars, which is why I bring you the promotional webseries “TPZ”. In case you didn’t know before, “TMZ” stands for “thirty-mile zone” (reference to L.A.), so I introduce to you the “thirty-parsec zone” with your host… Admiral Akbar! This is his side gig -- when he’s not commanding people in space dog fights, he’s commanding his reporters in the studio, dropping knowledge on what bars drunken socialites like Princess Leia are being thrown out of after her son leaves her for the Dark Side, and that crazy night General Hux tried some space crack and demanded Kylo Ren accept his challenge to a sword fight, while flashing everyone around him (definitely not a lightsaber duel he was propositioning, ifyouknowhatimean). For the real nerds out there too, they will have routine updates on the disappearance of Constable Zuvio. (Why can you find him in toy stores but not on Jakku?!) Not a bad gig for one of the Resistance's best leaders. Don’t forget, he’ll always be able to spot if a rumor is really… A TRAP!

Sure, there’s that long, ongoing debate about who shot first, Han or Greedo? (It was Han, and keep it that way dammit!) Casual fans don’t know much about this character, who he really is and where he came from. All a lot of us know is that he is funny-looking and was sent by Jabba the Hut to kill Han Solo for dropping some illicit cargo to avoid getting arrested, but what we don’t know is why he is so committed to killing the (at the time) young smuggler. What made this native of Tatooine into such a ruthless bounty hunter being controlled by a giant slug-man who forces other more able-bodied space men and women to carry out physical activities he never could, even in his physical prime? That’s why a film about Greedo’s rise to bounty hunter slavery sounds so alluring to me. It’s an opposite to Luke’s story of the same origin and may in fact shed more light onto the criminal underground of Tatooine, which seems far more sinister than the slums and wastelands of Jakku.

Even though it’s at most a 30-second clip, the cultural phenomena, which may have been the seed that lead to extreme fan backlash of Star Wars creator George Lucas, it cannot be ignored! This is why I highly recommend Disney start capitalizing on this and stir the pot. They should make a documentary/debate that examines both sides of this from fans and Star Wars “experts’; all shot live from their labs where they study the Star Wars universe (AKA their parents' basements). It could be here where Disney makes the promise to fix what many fans have deemed what Lucas made wrong. Haters of the prequels, unfortunately, will not get new versions of those (although there is a copy of Phantom Menace with Jar Jar Binks cut completely out), but perhaps the original trilogy can stay as it was originally made. It could also help newbies to the franchise understand a bit of the history and why their possible parents or creepy uncle is so obsessed over the fact that Han Solo straight-up murdered somebody in one of his first scenes, which shows how his character developing into a hero and Rebellion leader later on shows even more growth than without.

We’re getting Han Solo and Boba Fett origin movies. Nerd rage aside on Boba Fett (seriously, out of original continuity, Fett has four lines in Empire Strikes Back, only a Wilhelm scream in Return of the Jedi, and 20 lines in the much-hated Star Wars: Holiday Special, which is also his first appearance… why is he so popular? Okay. Okay. I’ll stop.), they are seriously missing out on a character that is immensely popular for all the right reasons but we know little about when you stack it all up, and that’s Yoda. Yoda is so ingrained in the minds of many with Jedi culture that it seems at times he may have invented the whole religion and philosophy himself. We know that not to be true, but let’s see who taught this creature the ways of the Force and if he struggled to become the wise man he is when we meet him in Empire Strikes Back. It’d be interesting to see him be smug and arrogant since it seems like he was one with the Force before he literally became one with the Force. It’s much better than seeing Boba Fett jetpack around and now say four things in a Star Wars version of Drive… but Drive is still a great flick so I wouldn’t hate that too much when I think about it...

Who doesn’t like the big, hairy, dog-faced wookie Chewbacca? Much to my girlfriend’s dismay, my text message alert is his roar, so all night when my insomniac comedy friends text me about who told the best joke of the night, she gets to hear the sweet sounds of his roar as I’m lost in my nightly coma. Girlfriend aside, Chewie is a staple and a fan favorite. From a lot of the reactions of the characters around him too, it’s safe to say that Chewie is pretty witty. He knows how to crack a joke and call people out on their missteps. What does this sound like to you? Well, despite the fact that most of us can’t understand a word he’s saying, it sounds to me like Chewie has all the characteristics of a talk show host! This is why I pitch to you “Chewbacca Tonight”, where the charismatic canine or space ape creature (seriously, what the heck is a Wookie supposed to be?) interviews celebs from a galaxy far, far away, or some from our own galaxy who are willing to make the trip. It would work pretty great because people mainly tune in to talk shows for the celebs being interviewed and their reactions, so why not have a host with all the talent of one of my favs, Conan O’Brien, but all we have to go off on is his physicality and the raw reactions of the celebs who can understand him? Sounds like a ratings bonanza to me. Let’s not forget his late night band, Evar Orbus and His Galactic Jizz-Wailers. That’s right, straight from the cantina, the Jizz-Wailers will be spewing out their classic style of music called Jizz all over the audience for this show, and to top it off--Wait. Oh gross, Internet readers! I know what you’re thinking, but you’re wrong -- it’s a type of music played by an alien musician called a Jizz-Wailer. Don’t believe me? Go to Wookieepedia yourself, and for the love of Jizz, get your head out of the space gutter.

Seriously, whether it’s Disney or somebody else pulling the Star Wars strings, hire me right now! I know I can make your Star Wars universe into something so much more. Don’t you people have imaginations? Note: I have copyrighted all of these ideas (even though you actually can’t do that) so tough noogies! Kevin out!

In case you haven’t seen it, check out the Rogue One trailer below! It looks great, and for those anxiously awaiting a year-and-a-half for the release of Episode 8, this might make the wait seem a little less when it hits theaters this December: