5 Reasons Chrissy Teigen is a Goddess Among Us! 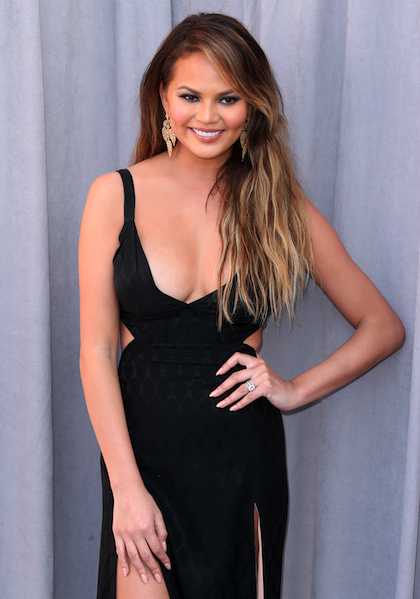 If you loveChrissy Teigen, raise your hand!

We DEFINITELY have some serious feelings for this woman! And who could blame us?

In case ya didn’t know, Chrissy is a stunning Thai/Norwegian model who rose to fame when she appeared in Sports Illustrated’s Swimsuit Issue in 2010. She was quickly named “Rookie of the Year” and continued to appear in their 2011-2014 issues. And if that wasn’t impressive enough, she appeared on the cover of their50th Anniversary issue alongside hotties Nina Agdal and Lily Aldridge!

Now, that might sound intimidating, but she’s not your typical model! Here are five major reasons why we love this girl to death:

1. She’s obsessed with food and can actually cook

If you follow her on social media, you’ll see that she’s cooking homemade mealsall the time. And her mother makes an appearance sometimes too, which is so cute. She’s not afraid to admit that she loves fast food, pizza and ranch, and other fattening goodies that most of us don’t want to confess to! She’s also a judge on MTV’s cooking competition show, “Snack Off”, where her feisty attitude and hearty appetite really shine through. You gotta love a girl who can eat!

2. She’s not afraid to say what’s on her mind

Again, if you don’t follow her on social media (links below), you probably should right now! When people piss her off, she fires back with a snarky yet hilarious comments. I mean, she once tweeted, “haaaaa I just realized I got my period dates mixed up and i'm not pms'ing i just love pizza and ranch and being a bitch.” She knows the true struggle!

The entire world already knows she’s stunning when she makes TV appearances or walks the red carpet, but she takes it to the next level when she posts pictures of herself with no makeup. And you can tell it’s a legit #nomakeup picture -- not like other celebs who will not be named, who claim to be natural, yet we can clearly see they have mascara and lipgloss on! Oh, and she loves wearing messy buns. We just love her for that. Twinsies!

She and her hubby John Legend are so adorbs, but I’m so glad she’s not just a trophy wife! She made a name for herself and continues to work hard, despite her husband’s success. Some of her campaigns include Gillette Venus, Olay, Nike, Skullcandy, Gap Factory, XOXO, UGG Australia, and Rock and Republic. She has also served as a recurring guest host and contributor on E!, TMZ, MTV, FUSE and "Extra". Chrissy is obvs a hard worker and can make it on her own! Even though having a Grammy & Oscar-winning hubby is a major plus!

She really just doesn’t give a flip about what people think about her. It’s refreshing to see such a beautiful and famous face speak up and have her own mind. She seems to be candid 110% of the time and we couldn’t love her more for that. She doesn’t take herself too seriously and can be a total goofball. She is our ultimate woman crush and always will be!

And while you’re here, check out our exclusive interviews with Chrissy in the YH Studio and at the Super Bowl!