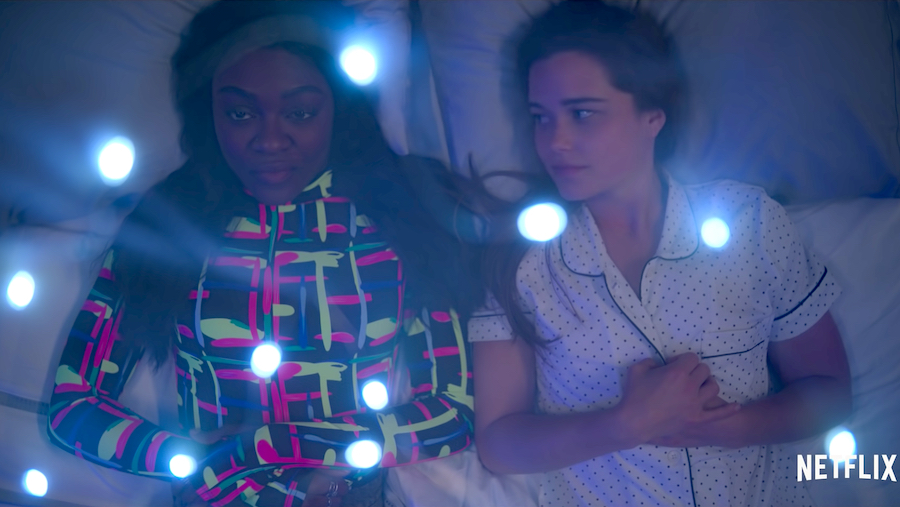 We’re coming up on the last few weeks before Summer vacation, which marks the season and series finales of our favorite TV shows. For most, we’ll need to wait 3 months to even a year to see what happens next season. It’s a weird time; like, what else is good to watch during Summer break? It’s cool! We found some great NEW Summer TV viewing options to get you through those reruns and game shows all Summer long. So, pour a glass of ice-cold lemonade and put on your favorite shirt from high school you haven’t parted with and flip through these sizzling shows!

Taking the first BITE on our list is Netflix’s supernatural teen drama about high school forbidden love, "First Kill". The new show is based on short stories written by V.E. Schwab, who also serves as producer. Preparing to make a rightful place into her powerful family of vampires, Juliette Farimont (Sarah Catherine Hook) will need to make her first kill. Fairmont sets her eyes on the new girl in school, Calliope Burns (Imani Lewis), who comes from a generation of monster hunters and will need to make her first kill. Catch the 8-episode series now streaming!

Summer vacations can also lead to cool Summer Jobs! But what if you found a job navigating and working through a haunted theme park with the potential to save all of humanity! Netflix’s newest animated comedy, "Dead End: Paranormal Park", takes three friends and a once-demonic possessed talking dog for a ride as they battle supernatural forces inside the park. The series is produced by the same people behind The Amazing World of Gumball and stars Emily Osment as Courtney, Zach Barack as Barney, and Alex Brightman as Pugsley. Catch the first episode dropping June 16 on Netflix!

Getting expelled and being sent across the globe to shape up while hanging ten on the coastal beaches of Australia doesn’t sound too bad. Teen drama "Surviving Summer" takes us on a journey with Summer Torres (Sky Katz), a high school rebel from New York, who is sent by her parents to live with family friends in Australia. Despite all her objections to leave, Summer falls in love with the town, the people and the surf. The 10-episode series premiered earlier this month and has received positive reviews and should be receiving a second season soon!

Taking a break from defending the Galaxy from Sith Lords and upholding the Jedi Order can take a toll on your average resistance fighter. Due to premiere August 5 on Disney + is "LEGO Star Wars: Summer Vacation". The story takes place after the events events of Star Wars: The Rise of Skywalker, where we see Rey, Finn, Poe, Rose, and Chewbacca take a vacation after defeating Emperor Palpatine. Finally taking some R&R is important, but with rest must follow hilarious chaos, especially from this LEGO Star Wars special.

Summer flings are the best moments that come out of the Summer experience. The last entry to our list comes from the world of author and executive producer Jenny Han with "The Summer I Turned Pretty". Coming from her hit book and TV series To All the Boys I’ve Loved Before, this coming-of-age drama stars Lola Tung in her first ever TV role as Belly Conklin, a young girl who heads to her favorite yearly Summer destination, Cousin Beach, where she spends time with her family and family friends. But this year is different, as she 16 and will experience first-hand what love means between 2 brothers. The new series will premiere June 17 only on Amazon Prime.