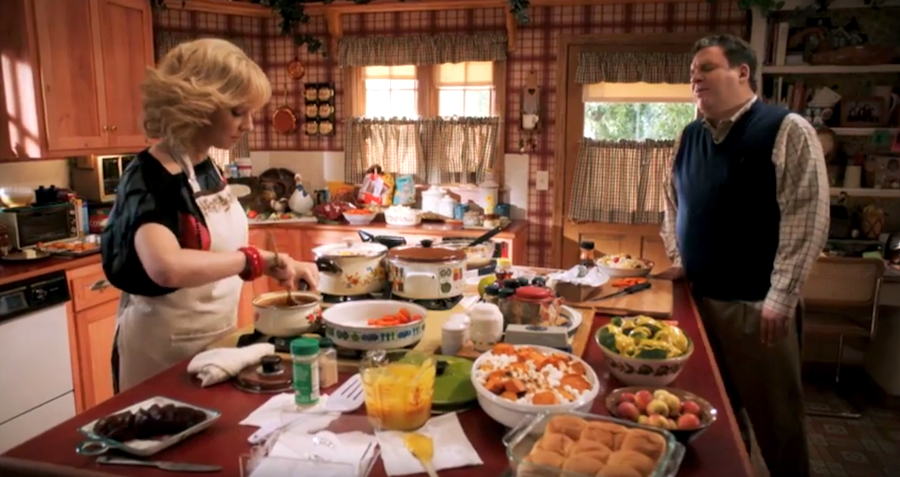 Don’t let those Christmas decorations at the mall or those holiday tunes on the radio distract you from the fact that we still got Thanksgiving coming up, folks! So break out those classic Thanksgiving songs, like… like… anyway there’s food! With Thanksgiving comes the turkey, the non-canned cranberry sauce that nobody eats, football (whether you like it or not), awkward family gatherings and, of course, the rare occasion a TV show does a Thanksgiving special! Today I will share with you some of my favorite specials in hopes it gives you something more to be thankful for this Thanksgiving season!

(Warning: It’s Thanksgiving, so most of these are family-oriented except for one weird one.)

“The Goldbergs” is a newer family favorite show but that shouldn’t undermine the fact that it gets chaotic family sitcoms just right. Being that the characters living in the '80’s on the show are Jewish, you won’t see a Christmas episode (except for the fact they kinda did one last year, parodying A Christmas Story, but that’s a tale for another time), so a Thanksgiving special is something this show has consistently put out. The episode I’m talking about today is all about when the head of the Goldberg household, Murray, gets the usual visit from his quick-scheming brother Marvin, who is your typical weird, perpetually single uncle. This is what puts this episode on this list for me. Whether it’s the '80s or today, I’m pretty sure we can all relate to this uncle showing up and begging one of our parents for money for their start-up business, or showing up in their flashy new car (it’s a Delorian in this) and boasting about how well their life is going even though it’s falling apart. The implications of Marvin’s life in this episode are a little dark when you really look at it, but it’s freaking hilarious.

“That 70’s Show” has been off the air for over 10 years now, but, like “The Goldbergs”, it takes place in a different decade. Could be a coincidence, or could be that Thanksgiving harkens back to simpler times. Who knows? But this special makes my list because it sums up being an awkward teenager pretty well. It starts with the main character, Eric, waiting outside a bus station with his parents for his older sister Laurie and her college friend. Right from the get-go, it seems like Laurie’s friend is hitting on Eric and he doesn’t know how to react. Later on, they make out until the friend is suddenly not into it anymore. Eric tries to play it off cool but isn’t. The kiss sets off a chain of events with his next-door neighbor and love interest, Donna, which pretty much sets up that they wanna date each other for basically the rest of the show. The turkey at the center of this episode that I like to dive in is the awkward Thanksgiving dinner and how, even though she doesn’t appear, Eric’s grandma is a completely shrill.

How I Met Your Mother – "Slapsgiving"

This was a tough one. “How I Met Your Mother” was a show I turned my attention to for this article because I remember there being a few Thanksgiving specials, but I was wrong -- there are, in fact, a lot! The episode I throw onto the Thanksgiving table, however, is their second Thanksgiving special that solidified an odd bet created in an earlier episode called "Slap-Bet". It’s simple; the winner of whatever the bet is gets to give the loser five slaps at anytime during their lifetime. They can do them all at once or spread them out over their lives and inflict an overwhelming sense of fear and dread upon the loser throughout their daily life. Marshall is the winner, and the episode is all about how he is going to slap Barney at some point during their Friendsgiving dinner. He even sets up a countdown on Barney’s computer, and when this episode was going to air, they did some viral marketing with a website that featured the countdown as well. (What an age to be alive in!) The episode is truly a classic and ends with a musical number all about, of course, slapping.

Yup, the episode is simply called "Pangs", as in hunger pangs, something we only feel on Thanksgiving if we are starving ourselves to really dive into the one big dinner of the day. In this pretty bizarre episode of “Buffy”, one of Buffy’s best friends, Xander, has steady work in construction and helps out in breaking ground on a new Anthropology building at Buffy’s college. The twist is it’s a Native American burial ground and the construction awakens the spirits of fallen Native Americans into murderous, corporeal forms. They also put a curse on Xander for breaking the ground and give him syphilis. It’s considered one of the most controversial episodes of “Buffy”, but it’s quite entertaining and considered one of creator Joss Whedon’s favorites. It’s also got a pretty cynical view on Thanksgiving, which I’m sure a lot of us need right now. The episode culminates into a Friendsgiving feast where everybody tries to get the Native American sprits to rest through fighting and magic! (Classic “Buffy”.) It’s also got one of my favorite quotes ever in “Buffy”, and about Thanksgiving in general: “To commemorate a past event, you kill and eat an animal. Ritual sacrifice with pie.”

Sure, this isn’t a straight-up Thanksgiving special per se, but every Thanksgiving dinner needs a dessert, and for many Americans, Black Friday is exactly that. Black Friday is so popular now that it starts on Thanksgiving night at 6PM in many places. I personally have never understood Black Friday. It’s just not for me. This episode of “South Park”, and the following two that comprise a Black Friday trilogy, is genius parody of the whole holiday that incorporates “Game of Thrones”. For “GoT” fans, you’ll love the parallels of working mall security on Black Firday to taking the black on the Wall and fighting off mindless zombie consumers. For people who either love Black Friday or hate it, you’ll find yourself laughing and agreeing with how ridiculous the whole thing is.