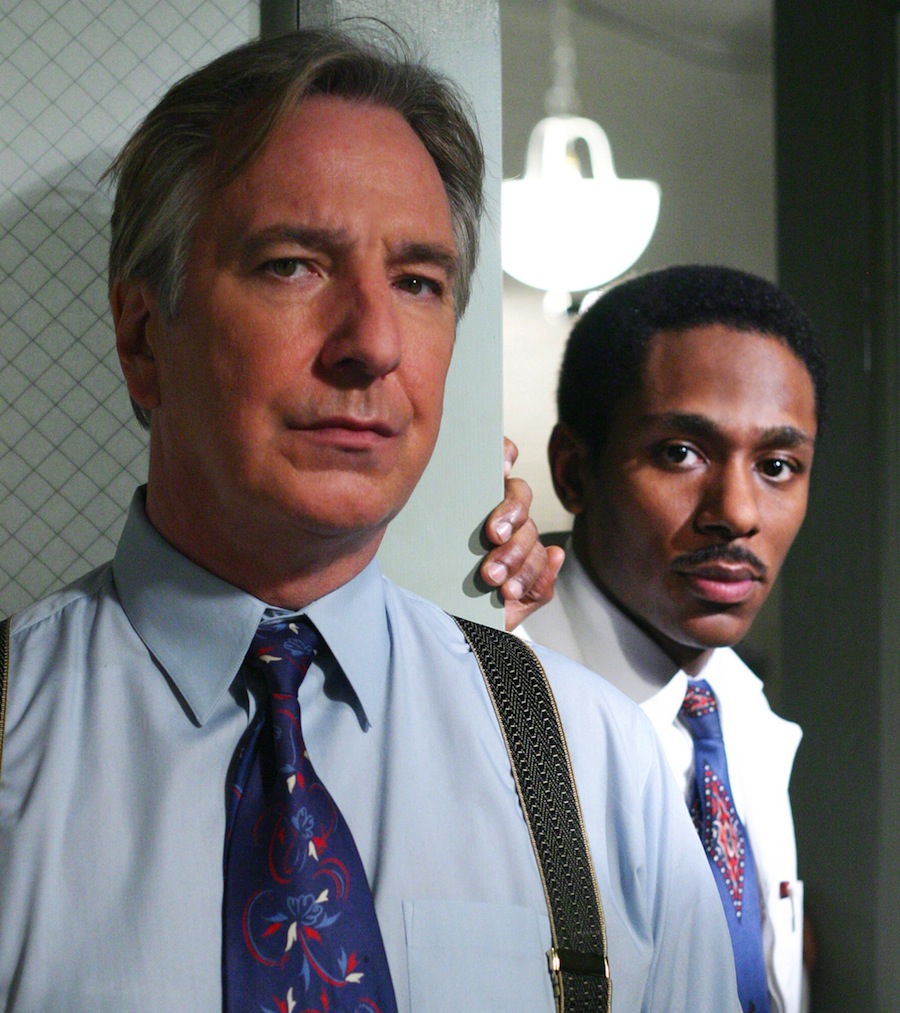 Alan Rickman was only 69 years old when he passed away this week, an immense talent in the world of film and theater and one who will be greatly missed by myself and millions of fans. How can one sum up what Alan Rickman was able to accomplish during his career? His slow methodical deliveries and passionate enunciations were his calling cards and unforgettable to be sure, but they would’ve merely been seen as gimmicks were they not backed by a genius and intuitive gift for performing. Back in the day, I wrote a series of articles called “Recasting the Classics”, and in those article,s I would take classic films and imagine different actors portraying the iconic roles within them. Perhaps the greatest compliment I can personally pay Alan Rickman is to say that I could never play that game with him. The roles he played were 100% his without question. I am sad that this man, whom I’ve enjoyed watching onscreen for as long as I can remember, is gone. To pay further tribute, I have listed my Top 5 favorite Alan Rickman roles below. Rest in peace, Mr. Rickman, and thank you for your great work.

Die Hard is considered by many folks to be the greatest action movie of all time, and they’re probably right. John McClane is the blue-collared Everyman that we rally behind, but a hero is only as good as his villain, and as Hans Gruber, Alan Rickman proved to be one of the best the film world has ever had to offer. Slick, terrifying, funny, and lethally intelligent, Rickman’s performance as Gruber went a long way in ensuring that Die Hard would become the action classic that it is. You obviously wanted McClane to succeed in stopping these terrorists (Gruber laughs at that name), but if you’re honest with yourselves, there is a part of you that wants to see them succeed. When Gruber and his gang finally break into the vault, it is a joyous moment that temporarily finds you taking pleasure in their brief victory. As Theo is counting the bearer bonds with gleeful laughter, he looks over and smiles at Gruber, who returns his smile with one of his own. And even though you seen this suave intellectual brutally murder two people, in that one instant, he comes off as human. It’s a small moment but one of incredible achievement that is a surely a testament to great filmmaking and Rickman’s huge talent.

Galaxy Quest is a delightful little yarn about has-been actors getting the chance to live out their former roles as television sci-fi heroes when they are recruited by a real alien race to help defeat the forces of evil. It’s basically Three Amigos! in space, but it’s a heck of a lot of fun with great performances all around. Rickman especially knocks it out of the park as Alexander Dane, a former Shakespearian actor starving for relevance, yet forced to sustain himself on the corny nostalgia of his nerdy fans. Every withering glance he gives speaks volumes, and his small panicky reflections on former stage glory are simultaneously endearing and hysterical. Alan Rickman also had many run-ins in his career with the world of theatre but is mainly remember for villainous film roles like The Sheriff of Nottingham in Robin Hood: Prince of Thieves, Severus Snape in the Harry Potter films, and, of course, Hans Gruber. Taking that into account, one wonders if perhaps there wasn’t something a little personal about his portrayal of Alexander Dane...

It was never not a joy to watch Alan Rickman play angry, and his portrayal of the bitter angel The Metatron is no exception. Seriously, the word "fish" has never been uttered with such purpose in the whole of human existence. In what is arguably Kevin Smith’s best film, Mr. Rickman plays the herald of God and is the one who tasks our heroine Bethany with the holy mission that serves as the film’s plot. And while Mr. Rickman steals each scene with his frustration and annoyance, he is also allowed to show his more compassionate side as well, which is a treat in and of itself for those who only remember his past onscreen villainy. It’s a memorable role that only serves to elevate the film and cement our love for Mr. Rickman further.

In 1990, Alan Rickman found himself back in the role of the villain in this western that featured Tom Selleck as Matthew Quigley, an American cowboy who is brought to Australia by the evil and rich Elliot Marston (Rickman) under false pretenses. A fight ensues, and Quigley finds himself left for dead in the Australian Outback. The character of Elliot Marston is one of my favorite Rickman roles because of the way in which he is portrayed. He is a spoiled rich man who fantasizes about being a gunfighter on the level of folks like Wild Bill Hickok. He is a self-obsessed man with a lot of money and an itchy trigger finger, which also makes him very dangerous. Marston is a lethal villain to be sure, but there is an almost childish nature to the man that couples quite naturally and very subtly with his wit and ferocity. He’s a big kid who treats people like his toys and lacks a true grasp on the meaning of humanity. His lack of compassion is not so much missing as it looks like it was never there to begin with. He dreams of being a gunfighter because it is a profession in which people are praised for committing murder essentially. It’s another flawless performance from Rickman, and while it’s not his most well-known role, it’s one that definitely deserves some attention.

I know I’ll probably get in trouble for not including Professor Snape or The Sheriff of Nottingham on this list, but perhaps a bit of Rickman’s famed villainy has rubbed off on me. Well, maybe not, but his performance as Dr. Alfred Blalock is a great one, and I remember very much looking forward to this movie’s debut back in 2004. As the co-creator of heart surgery, along with Vivein Thomas, Dr. Blalock tore down road blocks in both the world of medicine and racial justice. Blalock was a man of great strength, but it was perhaps his moments of weakness where he doubted himself and failed to fully back up his friend Vivien when it mattered the most, that truly made for a memorable performance and one of the greatest of Rickman’s career.