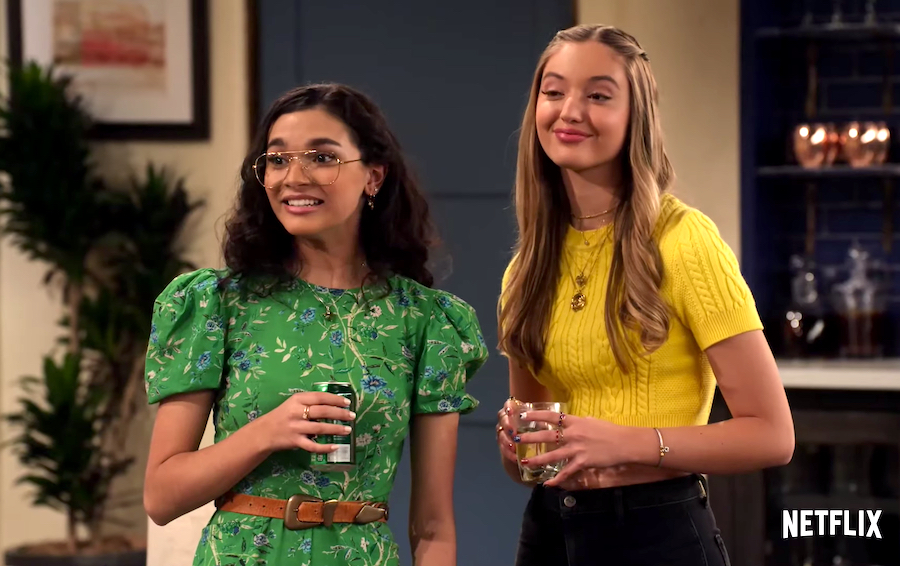 You know that feeling when you finish the latest season of a show and frantically Google when the next one will come out only to find that it won’t be any time soon? The only thing more gut-wrenching than that is when Google hits you with the worst news possible: your new favorite show has been canceled. Just like that, the world you’ve become so invested in over the past few weeks — or hours, depending on your binge-watching skills — has disappeared, vanished entirely from existence. Before the ink was even dry on this article, Netflix crushed our hopes again by canceling "First Kill" after only one season earlier this week.

So many questions left unanswered! So much potential waiting to unfold! Quite a few great Netflix originals were doomed with cancellation and it's time that we acknowledge just how amazing those shows are.

P.S. This article is spoiler-free! If you haven’t yet seen these shows, they are definitely worth the watch (despite their tragic cancellations).

1. “Julie and the Phantoms”

“Julie and the Phantoms” delivers a touching message about the power of music and encourages us to think about the afterlife in a new light. The first scene flashes back to 1995 when three members of a boy band by the name of Sunset Curve ate some bad hotdogs on the night of their biggest performance yet. They instantaneously got such bad food poisoning that they died. Yes, you read that right. The boys — Luke (Charlie Gillespie), Alex (Owen Joyner), and Reggie (Jeremy Shada) — die mere hours after ingesting one hot dog each. Fast-forward to present day where teen girl Julie (Madison Reyes) is cleaning out her mom’s old music studio. When she listens to an old Sunset Curve album that she finds there, cute teenage ghost boys pop in out of nowhere. The band members have some unfinished business to take care of, and it turns out that Julie might need them as much as they need her. The cherry on top: extravagant dance numbers choreographed by the legendary Kenny Ortega. The sprinkles: Julie’s angelic (no pun intended) singing voice. Toward the end of the last episode, it looks like things are coming to a natural conclusion. All is well enough until the last few seconds, when a major plot twist has us worried for Julie and the boys. Where would things have gone from here? We may never know, but we really wish we did.

“No Good Nick” explores the importance of forgiveness, gratitude, and self-awareness. The show inspires us to deeply consider how our actions affect the lives of others. Teenage con artist and foster child Nicole "Nick" Patterson (Siena Agudong) moves in with the Thompson family — Liz (Melissa Joan Hart), her husband Ed (Sean Astin), and their kids Molly (Lauren Lindsey Donzis) and Jeremy (Kalama Epstein) — claiming to be a relative. Nick’s motive: to literally rob the Thompson’s of their belongings for monetary gain. Nick’s hidden motive: to rob the Thompson’s of the things they love most for revenge. In case you’ve yet to see the show, I won’t disclose why Nick craves vengeance. During her long con, Nick becomes close to the Thompsons and struggles with the idea of hurting them. Ultimately, both Nick and the Thompson family learn the dangers of getting caught up in selfish goals. They find out the hard way that bringing other people down is not the way to lift yourself up. The first 2 seasons did an amazing job exploring the intricacies of family and friendship, and we would have loved to continue watching the characters grow in a third season.

This heartwarming show can be best described as a modern day take on “The Nanny”, give or take a few extra kids and some country music. The cast is made up of so many amazingly talented, well-known singers and actors that it’s hard to keep track! Katharine McPhee — runner-up on Season 5 of “American Idol” — portrays Bailey Hart, an aspiring country singer who was recently dumped by her boyfriend, Boone (Eric Balfour), and kicked out of his band. In the middle of a big storm, Bailey’s truck breaks down and she knocks on a random door for help. The Haywood family — with Beau (Eddie Cibrian) at its head — welcomes Bailey as their nanny. Although she has no experience in childcare, Bailey forms a close bond with each of the kids. From the wholesome lessons that Bailey and the Haywoods learn from one another to the perfectly-selected lineup of soulful songs, watching “Country Comfort” is like settling by the fireplace with a warm cup of hot chocolate. Plus, the one and only LeAnn Rimes makes an appearance in Episode 5! Although the last episode of the series did tie up quite nicely and there were no cliffhangers, we are sad to know that we won’t be getting more music, sass, and life lessons from “Country Comfort” in the future.

Previously titled “The Expanding Universe of Ashley Garcia”, this show follows Ashley (Paulina Chávez), an extremely smart 15-year-old robotics engineer and rocket scientist. She moves in with her uncle Victor (Jencarlos Canela) in California for a new job at NASA’s Jet Propulsion Laboratory. Since Ashley went to college at the age of 9 and became the youngest person ever to get a PhD, she is looking forward to spending her time in California not only working but also learning what it is like to be a typical teenager. Spending time with an old friend and the high school football team that Tío Victor coaches, Ashley is able to balance her impressive work life with girls nights, football games, and school dances. She develops crushes and deals with heartbreak. Most importantly, through it all, Ashley’s friends celebrate her intelligence, and her ever-present confidence and determination in chasing her dreams make her a great role model. “Ashley Garcia: Genius in Love” had one season with two parts (8 episodes each) as well as a special Christmas episode as a last hurrah. However, the holiday episode was not intended to be a conclusion, so we still have many unanswered questions.

This series is a modern twist on the classic show of the same name which follows a divorced mother raising two teenage daughters. The Netflix show follows a Cuban-American family — divorced nurse and army veteran Penelope Alvarex (Justina Machado), her daughter Elena (Isabella Gomez), son Alex (Marcel Ruiz), and mother Lydia (Rita Moreno). Differing viewpoints collide as three generations live together and learn from one another. Through various discussions about serious topics such as sexuality and cultural identity, “One Day at a Time” sets a stellar example of how to foster open communication. When Netflix brought the show to a halt after Season 3, Pop TV picked it up for a 4th season, but COVID sadly led to it being canceled once and for all.