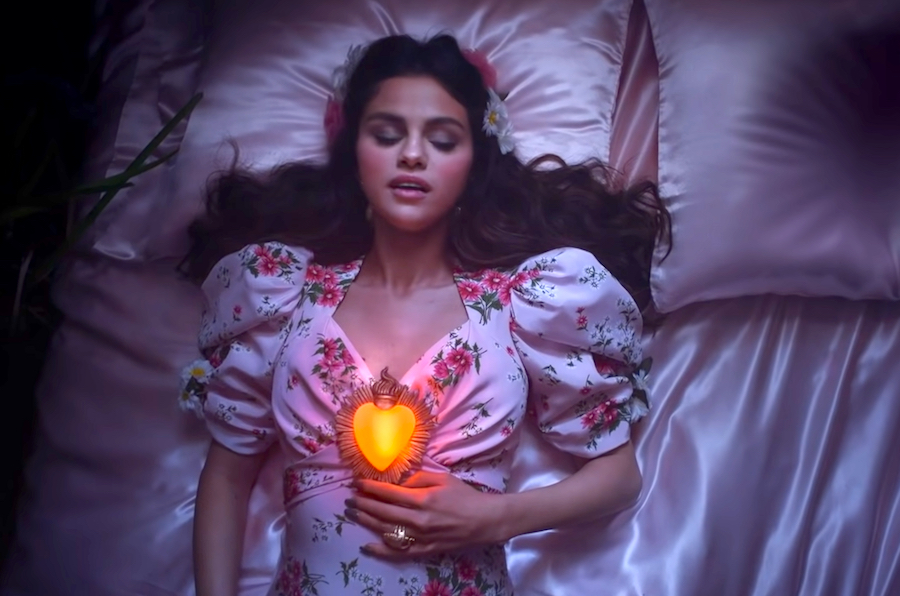 Nearly a year after releasing her third solo studio album, Rare, pop sensation Selena Gomez has made her return to the music scene with “De Una Vez” (Spanish for "At Once"). This is the first all-Spanish single from Gomez in over a decade, the last time being “Un Ano Sin Lluvia” (“A Year Without Rain”). The new song is about Selena finding strength after a heartbreak and dedicates the Spanish track to anyone whose hearts have been broken. Selena paired the single with a magical music video directed by husband and wife team Tania Verduzco and Adrian Perez, a.k.aLos Perez. The video is filled with symbolism representing her Mexican roots and easter eggs hinting at her journey as a performer.

Here are four easter eggs we found in the music video for “De Una Vez”!

Selena’s styling in the “De Una Vez” music video is a nod to Mexico’s iconic artist, Frida Kahlo. The flowers on her Rodarte dress and the ones styled in her hair match the way Frida did. Verduzco tells Vogue they wanted to have these connections in the video but with a modern twist.

The glowing heart wore by the pop singer in the music video is a reference to the sacred heart. The image is regularly found within folk art from Mexico. Los Perez intended for the heart to serve as a metaphor for the healing portrayed throughout the story.

“We designed the heart—we call it the Milagro in Mexican culture—and its light to be a metaphor for the healing throughout the story.” - @LosPerezTVpic.twitter.com/UsyI24pqqb

3. A Nod to Selena’s Disney Channel Past

Remember the iconic opening credits to “Wizards of Waverly Place”? The scene in the music video where Selena is in the mirror brings back memories from her Disney days. This moment in the “De Una Vez” music video makes Selenators from all over nostalgic.

How it started how it’s going#DeUnaVez@selenagomezpic.twitter.com/v1ss7fKypd

4. “Baila Conmigo” Could Potentially Be The Next Single

Selena Gomez has hinted her interest in making an all-Spanish album in the past but has yet to do so. Many fans speculate that the words “Baila Conmigo” are the title of a song that has yet to be released and possibly lead to a full album. [*fingers crossed*]