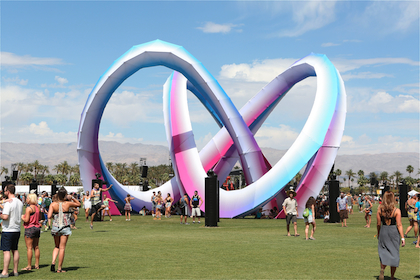 As soon as the weather gets warmer in many parts of the country (and the rest of the world, for that matter), people start to leave everything inside, travel to the middle of nowhere (in most instances), and attend music festivals.

No one really knows what the exact mystique is, but there is something unique and special about being in the open air, crowding around a stage next to complete strangers, and seeing set after set of amazing live bands do what they do best.

They, in essence, are all that is great about the music industry, and where other than a cool music festival can you see dozens upon dozens of big names AND more up-and-coming acts get together and perform non-stop? Nowhere else really.

Coachella epitomizes all these ideals. Where do we even begin? Nothing can compare to the trendiest and most eager music fans and celebs alike getting together in the middle of the Southern California desert for multiple weekends of complete and utter musical bliss, and although tickets are usually super expensive and sell out too fast for most of us to get them, at least there are live streams offered so that everyone can partake in the utter epicness that is the Coachella Valley Music and Arts Festival, now in full swing!

Here are 3 other can't-miss music fests for diehard music lovers:

Although this year’s South by Southwest has already come and gone, the cool thing about this event is that film and technology are also incorporated in an extravaganza of all things entertainment. Some of this year’s key performers at SXSW in Austin included The 1975, Phantogram, and Soundgarden, as well as other up-and-coming acts like Heathers, Rixton, and White Sea!

Over in Chitown, Lollapalooza is always a good place to go see some of the biggest bands and artists in the country. Grant Park is usually packed full, and to say Lolla is fun only putting it mildly. It is one of the archetypes of a PERFECT music festival. This year's lineup includes no less than Eminem, Kings of Leon, Foster the People, Zedd, Iggy Azalea, and tons more!

The Governor’s Ball, like the others on this list, is a famed music fest for a lot of the hardcore East Coast music fans wanting to see tons of their fave acts all in get together for one weekend of debauchery in the Big Apple. Iconic in name, this year’s lineup includes sets from Outkast, Vampire Weekend, and Phoenix, just to name a few.

At least once in your lifetime, make sure to visit some of theses amazing and worthwhile celebrations of all things rocking and rolling!