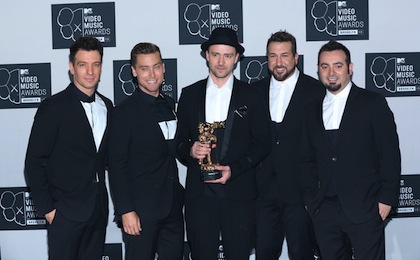 Every year, MTV pays tribute to its past of being “Music Television” by staging the Video Music Awards and honoring the biggest musical artists and letting them do pretty much whatever on both the red carpet and the stage. While the Grammys attempt some modicum of sophistication, the VMAs are where musicians let their hair (and sometimes clothes) down and just have a huge party. In its 29-year history, the VMAs have spawned tons of memorable moments that we still talk about today, from the epic (Diddy’s tribute to Biggie Smalls, Madonna making out with Britney and Christina) to the uncomfortable (Rose McGowan’s “dress”, Fiona Apple’s acceptance speech) to the just plain wacky (Lady Gaga’s meat dress, Diana Ross cupping Lil Kim’s boob).

This year was no exception, as folks tuned in last night to see what 2013 had to offer. It remains to be seen if any of the events of the night will have any lasting impact for the better (like Madonna’s racy performance of “Like a Virgin” at the inaugural VMAs, viewed at the time as obscene but now considered her star-making moment), so with as much objectivity as I can muster – that is, not a lot – here is a chronological breakdown of the most, um, noteworthy moments from the broadcast!

- Lady Gaga opens the show with a subtle (for her) performance of her new single, “Applause”. The number includes a short prologue followed by 5 rapid-fire costume changes during the course of the song. And that's it. Unlike past performances, Gaga did not drag this one out. She came out on stage, did her thing, and did not overstay her welcome. Which is a good thing!

- Miley Cyrus is introduced by Vanessa Bayer doing an impression of Miley Cyrus, then she proceeds to frighten the children. Stripping down to almost nothing, violating a foam rubber hand, and grinding all over Robin Thicke, most spectators at home and at the Barclays Center were, frankly, stunned. As for Mr. Thicke, his wifey Paula Patton might have been understanding about the “Blurred Lines” music video, but this may very well have been the last straw that sees Robin sleeping on the couch for the next month…

- The crowd happily acknowledges One Direction; cut to Taylor Swift in the audience, who shifts irritatedly and mutters under her breath “Shut the f*** up…” Whoa, pump the brakes there, girlfriend! You’re in a public place with a dozen cameras on you… Save the bitter-ex admonitions for your next album.

- Taylor Swift wins Best Female Video for “I Knew You Were Trouble” and thanks the guy who inspired it for making her Moon Man glory possible. Cut to Harry Styles in the crowd looking perfectly stoic. (The prevailing rumor is that the song is about John Mayer anyway, but nice try, MTV!)

- Swifty sat next to her BFF Selena Gomez most of the night; Selena took home the award for Best Pop Video (“Come and Get It”) and my award for Best Dressed. Her peek-a-boo gown with the corset underneath was both elegant and playful/sexy without trying too hard. Unfortunately, though, Selena’s long hair, which she wore down, ended up covering the best part of the dress for most of the night! 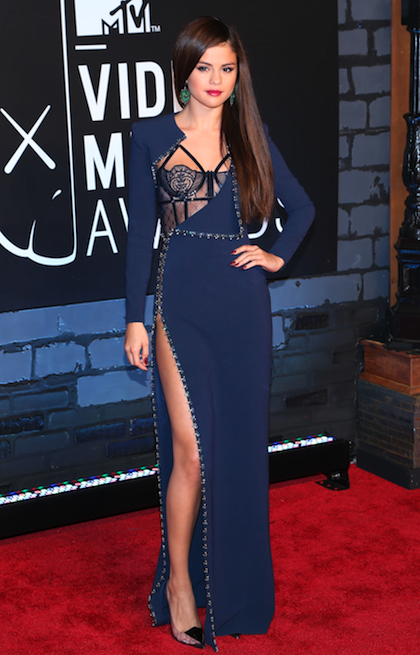 - Vanguard Award recipient Justin Timberlake takes the stage and takes over, performing a medley of his biggest hits, culminating in a rather anti-climactic *NSYNC “reunion”… Lance, JC, Joey, and Chris are all there, indeed, but do little more than serve as back-up dancers for Justin for about 3 minutes. They don’t even perform a whole song!

- Macklemore & Ryan Lewis perform their awesome and inspiring “Same Love”, which won the award for Best Social Message earlier in the evening. Mary Lambert joins them for the hook, of course, but then at the end, the performance is diva-bombed by Jennifer Hudson, effectively stomping all over Mary’s big moment with her big Oscar-winning boot. Geez, whose decision was that?? Poor Mary… What started out as an impassioned, authentic, and captivating performance ended up getting hijacked.

- Katy Perry closes the show with a boxer-themed performance of her new single “Roar” – from beneath the Brooklyn Bridge. She does some air-punching, some jump-roping, and in the end, she hoists the championship belt while two ring girls hold up signs proclaiming “GAME OVER”. A literal visual cue that the VMAs had come to a close, or Katy not-so-discreetly claiming her victory over Lady Gaga in the New Single Wars that sprang up last weekend? (Katy’s “Roar” has been sitting pretty at #1 while “Applause” continues to slip down the charts)

So, all in all, definitely a memorable night, but perhaps it could have been better. Tons of almost-epic moments that unfortunately fell flat. But hey, congrats to our boi Austin Mahone on his Artist To Watch win! We’ve had our keen eye on him for over a year now… Glad to see the rest of country catch up!

What was YOUR favorite moment from the VMAs last night?