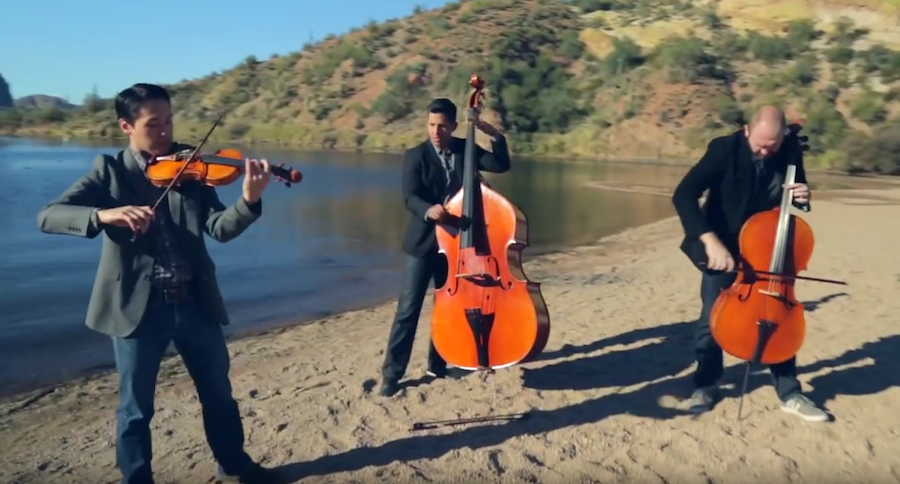 There's just something about an orchestra that kicks anything up to epic levels. Even the most laidback, mundane song in the world suddenly becomes the soundtrack to a big-budget war movie once you slap some violins and horns behind it! In that spirit, here are 19 orchestral covers of some of our favorite tunes that gives them an all-new, elevated flavor!

There are so many versions of Adele's hit song out there, but for my money, the best version is this cover by Simply Three. The song opens with Zach Clark tapping on the side of his cello in order to indicate the song's beat but he is soon joined by Alex Weill on violin and Nicholas Villalobos on bass. All of them together help emulate the tone of sadness that the song evokes and together they further dramatize the emotional vibe already present. There is absolutely no singing involved but for fans of Adele or the song in particular, you still get the same feeling that Adele was getting across.

The Piano Guys are another popular music group known for creating popular song covers, and we highly recommend listening to this mashup of Beethoven and One Republic's "Secrets". When the song first opens, we hear Beethoven’s "5 Secrets" being played by a single man and his cello, soon joined by another cello emulating "Secrets". Before you know it, a whole accompaniment of cellos joins in.

Technically, "Game of Thrones" music is already orchestral, but "Rains of Castamere" does include lyrics, so it counts! It still sounds very depressing, almost as if someone died...

The Royal Philharmonic Orchestra allows the King of Rock 'n' Roll’s music to become even more legendary. Yes, there are lyrics in this one, but the beginning features an interesting arrangement of string instruments before Elvis Presley's vocals drop, accompanied by an electric guitar and drums. Somehow, this version is even more upbeat than the original.

This cover of Taylor Swift’s song features a symphony of brass and string instruments like trumpets, horns, tubas, and violins. One can imagine just by listening to this music an epic battle taking place. We swear the version of this song sounds like it belongs in action movie, or better yet in a video game.

This version of MAGIC!'s hit features a group of many strings, ranging from violins to violas. For people that know the song well, they can easily recognize that it sounds exactly like the version that MAGIC! performs.

For those who are familiar with Calvin Harris and Elllie Goulding’s song, this orchestral version emulates it exactly on the nose. In this version, instead of the upbeat electropop music, string instruments take its place backed by the sound of drums and a gong. It actually inspires one to get up and accomplish something great. It’s that uplifting.

This is an interesting version of Rachel Platten’s hit. The song is already supposed to inspire men and women to stand up for causes that they believe in, but in this case the song sounds like it was made for the military. You hear bagpipes and the sound of a drum accompanied by string instruments and piano.

This sounds so different from the original sung by Jesse J, Ariana Grande, and Nicki Minaj; it almost sounds like it belongs in a horror movie with its high-pitched string instruments and deep melodic tones.

This song is one of our absolute favorites. Instead of Hozier’s somber voice, we only hear string instruments matching the dramatic backing of an occasional drum. It seems like this version would be a great way to end a sad or uplifting movie.

This song is an interesting cover to hear without Ariana Grande and Iggy Azalea's vocals; it sounds like it belongs in a video game. It employs this rather upbeat but violent tone of string and percussion instruments.

This song by The Weeknd, featured on the Fifty Shades of Grey soundtrack, sounds even better as an orchestral cover. It's prettier and cleaner, a song that one could almost dance the Tango too. The song features numerous string instruments and in some instances features a gong to help with the more uplifting parts of the song.

This song already lends itself very well to an symphonic feel, yet this orchestra manages to still turn it up to 11. Freddie Mercury would approve!

This classic Survivor jam is even more interesting and inspiring when you’re hearing only instruments play the song. It literally sounds like it should be the theme song for the next Super Bowl.

16. Symphonic Pop: "The Heart Wants What It Wants"

The original song sung by Selena Gomez is very sad whereas this cover belongs in another Lord of the Rings movie or something. The strings have both a deep and uplifting tone accompanied with the occasional sounds of a drum.

Let's face it, you guys, Imagine Dragons is MADE for orchestral covers!

Ditto with OneRepublic. This song in particular already has an epic vibe to it which this cover only amplifies.

Yes, we know this is the third time we recommend listening to a Simply Three cover but we can’t help it if we think they are good. In this version the strings are backed by the sound of a drum or an object being hit on the side of something to create that upbeat tone we hear in the song. We also hear all of the strings playing as fast as they can as the song itself is a fast one.