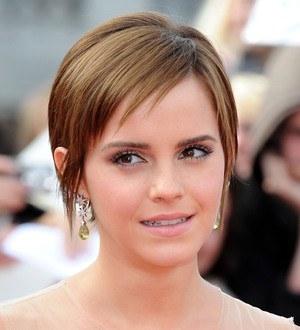 Emma Watson has been pictured kissing fellow actor Johnny Simmons just weeks after her representative denied reports they are dating.

The Harry Potter star, 21, was photographed smooching 24-year-old Simmons - her co-star in upcoming movie The Perks of Being a Wallflower - outside a restaurant in California earlier this week (beg01Aug11).

They were spotted embracing with their arms around each other before leaning in to lock lips outside the eaterie in Santa Monica.

An onlooker tells Britain's Mail on Sunday newspaper, "They were all over each other, kissing and hugging. It was very sweet to see. She looked utterly besotted... They're obviously head-over-heels in love."

In June (11), Watson was seen with Simmons at a park in Pennsylvania, but her spokesperson dismissed reports of a romance as "complete fiction".