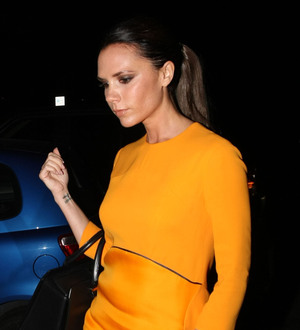 New mum Victoria Beckham is "resting and receiving treatment" for a back condition after reportedly aggravating an old injury as she gave birth to baby Harper.

The former Spice Girls star and her husband David became proud parents to their first daughter last month (Jul11), a little sister for their three sons.

Victoria Beckham has not been seen out in public since Harper was born, and reports emerged earlier this week (begs15Aug11) claiming she had suffered a slipped disc in her back while pregnant, which was antagonized when she gave birth.

Her spokesperson has now addressed the rumors, simply stating, "Victoria has a back condition. She is resting and receiving treatment."