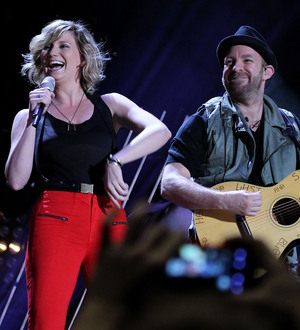 The tragic event, which occurred as fans waited for Sugarland to perform, followed an announcement by concerned organisers who warned that a storm was advancing.

It's claimed the dust bowl smashed into the scaffolding and rigging, raining steel and dirt into the terrified audience. Winds were estimated between 60 and 70 miles-per-hour (96 to 112 kilometres-per-hour).

Four people died during the tragedy and 40 people were injured - many of them from the VIP section near the stage. Indiana State Police Sergeant Dave Bursten added that some of those injured were in "very serious" condition and conceded it was a "very likely possibility" that the death toll could mount.

Sunday's (14Aug11) activities have been scrapped, but the fair is expected to resume on Monday (15Aug11) with a service to honor the victim's of Saturday's disaster. The Indiana State fair runs until 21 August (11).

Sugarland, who were due to headline the event, have taken to their Twitter.com page to express their condolences.

In a message to fans, they write, "We are all right. We are praying for our fans, and the people of Indianapolis. We hope you'll join us. They need your strength."

And Bareilles, who had performed on the stage earlier, tweeted, "I'm speechless and feel so helpless. Please send love and prayers to Indianapolis tonight. My heart aches for the lives lost."