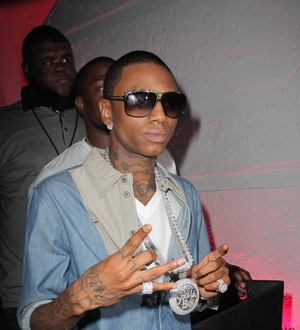 Soulja Boy's representative has blasted reports the rapper bought a $55 million jet, insisting the rumours are simply "not true".

The Crank That (Soulja Boy) hitmaker, real name DeAndre Cortez Way, was said to have marked his 21st birthday by treating himself to his very own private jet, with planned extras to include four liquor bars, flat screen TVs and Brazilian hardwood cabinets.

However Soulja Boy's rep, Greg Miller, has dismissed the reports, telling the Los Angeles Times, "The elaborate rumours circulating about Soulja Boy purchasing a jet for his 21st birthday are grossly over exaggerated and are not true."

But Miller did reveal the rapper spent $300,000 on a lavish party at a Miami, Florida nightclub on Friday (29Jul11) to celebrate the milestone.