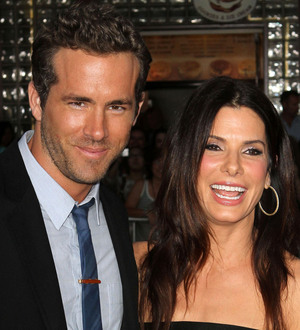 Ryan Reynolds invited an old pal to walk the red carpet with him at the Los Angeles premiere of new movie The Change-Up - he took Sandra Bullock as his date.

Reynolds split from his wife Scarlett Johansson in December (10), and rumours started to swirl he was romancing his The Proposal co-star Bullock after they were spotted spending time together.

The Speed beauty cleared up the speculation by explaining that Reynolds had been an "amazing friend" in the months after her divorce from cheating ex-husband Jesse James at the start of 2010.

And Reynolds asked her to return the favour on Monday night (01Aug11) - Bullock supported him at the screening of his new movie as they faced the snappers, whispering and laughing their way down the red carpet.