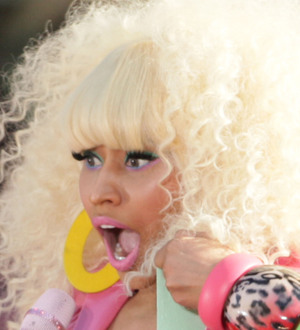 The hip-hop star hit the stage as part of Good Morning America's Summer Concert Series and performed a handful of her most popular hits.

But she suffered an embarrassing nip slip when her cropped green bra top slid down, revealing her left boob to the world as she jumped up and down singing her latest single Where Dem Girls At.

Eagle-eyed TV producers managed to catch the incident just as her nipple started to show and blocked it from airing with a blank grey screen for a few seconds as Minaj noticed the wardrobe malfunction and covered up.

She brushed off the incident and continued her set, entertaining fans with renditions of Super Bass and Moment 4 Life.