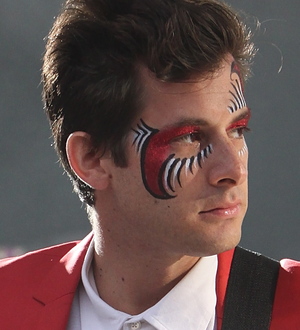 Mark Ronson ran for cover as a storm hit Belgium's Pukkelpop Festival on Thursday (18Aug11), and the traumatised star admits he's "never been a part of anything like that in my life".

The DJ and his band The Business Intl were watching an act at the event when severe weather hit the site, uprooting trees, which went crashing into a stage.

Ronson, who escaped injury, witnessed gig-goers "screaming and running" and also saw "hailstones the size of tennis balls" - and he's been left stunned by the tragedy, which killed at least five revellers and injured dozens more.

In a post on his blog, he writes, "(We) were in the Chateau tent watching the Smith Westerns at exactly the moment the storm hit. I've never been a part of anything like that in my life.

"The roof ripped off, the structural poles and lighting rig came crashing down and people started screaming & running, literally, for their lives. Once you made it out (of) the tent, you were pelted by hailstones the size of tennis balls. And we were the lucky ones.

"We're so genuinely sorry for the families and friends of the people that lost their lives and those that were injured, and we will be thinking of them for a long time."

Festival organisers have since cancelled the event, which was due to run until Saturday (20Aug11).