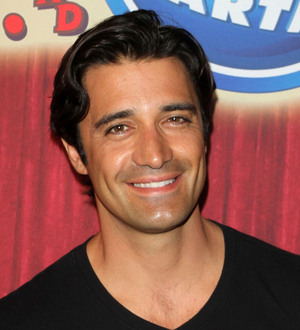 Kirk Douglas has made actor Gilles Marini's day after giving his new play This the seal of approval.

The Sex and the City movie star makes his stage debut in Melissa James Gibson's drama, about the lives of five friends in their 40s.

Gilles Marini stars alongside Saffron Burrows, Eisa Davis, Glenn Fitzgerald and Darren Pettie in the project, and they have been receiving critical acclaim for their performances at the Kirk Douglas Theater in California since launching earlier this month (Aug11).

But there's one review which stands out the most for Gilles Marini - a letter of thanks from Kirk Douglas himself.

In the note, dated 9 August (11), the Spartacus star writes, "To the cast of This, THIS is wonderful! My wife and I enjoyed the evening very much. It's very well written and very, very well acted. Congratulations! Sincerely, Kirk Douglas."

Gilles Marini posted a photo of the letter on his Twitter.com page alongside the caption, "Yeah!! Thanks to Mister #KirkDouglas. I will Keep this letter for ever ;) #Happy."