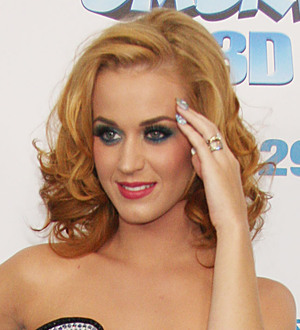 Katy Perry has landed a 10th MTV Video Music Award nomination after her promo for Firework was listed in the Best Video With A Message category on Thursday (04Aug11).

The pop star scored nine nods when the nominations were officially announced on 20 July (11), but now MTV bosses have added one more.

The Firework promo will go up against videos such as Eminem and Rihanna's Love The Way You Lie, Taylor Swift's Mean, and Born This Way by Lady Gaga when the awards are handed out in Los Angeles on 28 August (11).

Perry is also up for Best Pop Video, Best Collaboration, Best Direction and Video of the Year for Firework.

British soul sensation Adele is close on her heels with seven nominations and she will also compete for Video of the Year with Rolling in the Deep.

Matching Adele's seven nods is Kanye West, who is up for prizes including Best Hip-Hop Video and Best Male Video. He also has two shots at the Best Collaboration award for his duet with Rihanna on Lights and Katy Perry's E.T.

Gaga, who stole the show at last year's (10) award show by turning up in that now notorious meat dress, is up for four trophies - the same amount as Eminem and Bruno Mars.