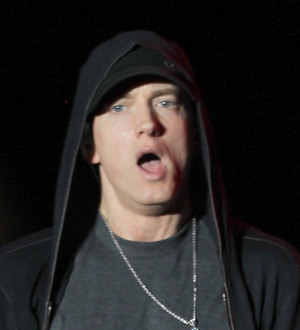 Eminem wowed fans at the Lollapalooza festival in Chicago, Illinois on Saturday night (06Aug11) with a series of special guests, a tribute to late rapper Nate Dogg and a little comedy.

The rap superstar ended day two of the festival with a hit-filled 90-minute set, which included appearances from his Bad Meets Evil collaborator Royce da 5'9", Bruno Mars and Skylar Gray.

The latter joined Eminem for her part on his I Need a Doctor, while Royce paired up with his latest partner for a rendition of Fast Lane from the couple's recent hit album.

The duo was then joined by Bruno Mars for a show-stopping performance of Lighters.

But the highlight of Eminem's set came when he poked fun at his past addiction troubles while pretending to sip vodka - only for liquid to spurt out of his body.