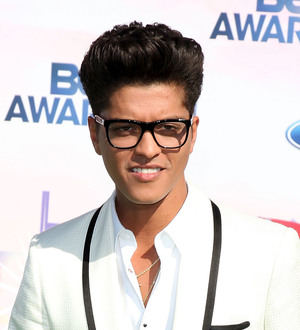 Bruno Mars' love life is heating up - the singer is romancing Latina model Jessica Caban, according to a new report.

The Grammy winner was spotted getting close to the brunette beauty at the Co-Op restaurant in New York City's Hotel on Rivington on Wednesday (03Aug11).

The Just the Way You Are hitmaker showed his romantic side by serenading Caban, before they left the hotspot together with friends.

A source tells the New York Post gossip column Page Six, "Bruno and Jessica were flirting until they left together with her friends at 1am. The group drank bottles of sake and cocktails. Bruno ordered steak and fed a brownie dessert to Jessica with his fork. Bruno even serenaded the girls - and co-owner Jason Apfelbaum, who was celebrating his birthday."