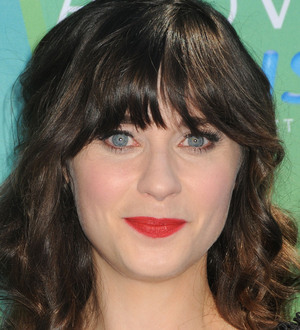 Zooey Deschanel is author Kristine Gasbarre's top choice to play her in the planned movie version of her hotly anticipated memoir, How To Love An American Man.

The tome isn't due for release until next week (begs15Aug11), but a host of Hollywood stars including Katherine Heigl, Anne Hathaway and Rachel McAdams have all been linked to the film project, according to New York Post gossip column Page Six.

But New Yorker Gasbarre, whose memoir charts her travels to Italy to discover her roots, has pinpointed the (500) Days of Summer beauty as her preferred choice and she's convinced Deschanel's Irish and French ancestry will be key to her performance.

She tells WENN, "First of all, I think any of the actresses (linked to the role) would be brilliant.

"(But) Zooey is just very precious and the character is an ingenue, very introspective. And because my Italian American heritage is really central to the story... I think her European roots would be an important element to how the actress plays the role."

She adds, "I have my heart set on Zooey... I want her to come attached to it."

The star has yet to enter talks to take on the lead role, although her manager, Sarah Jackson, is currently reading through the manuscript.

A spokesperson for Deschanel says, "While the book has been sent to Sarah to review, there has been zero talks at this point about Zooey being involved."

The buzz surrounding How To Love An American Man follows the box office success of another memoir adaptation, Eat Pray Love, which starred Julia Roberts.