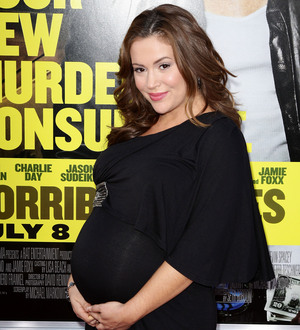 Alyssa Milano was joined by close friends and family over the weekend (13-14Aug11) as she celebrated the impending arrival of her first child with a baseball-themed baby shower.

The Charmed star, who is an avid L.A. Dodgers fan, announced in March (11) she is pregnant with her husband Dave Bugliari's child.

And on Sunday (14Aug11) she invited 35 pals, including actor Colin Hanks, actress Holly Robinson Peete and Twitter founder Jack Dorsey to the Dodger Stadium to celebrate her pregnancy.

USWeekly.com reports Alyssa Milano gave guests Dodgers cupcakes, while the star posted a photo on Twitter.com showing her holding a baby-size custom-made Dodgers T-shirt, with 'Bugliari' printed on the back.

She also thanked the attendees "for making this day so special" on the social networking site.