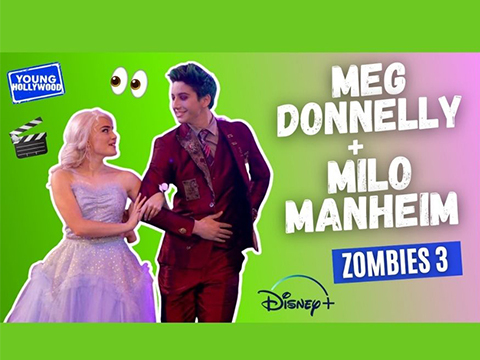 Just as there is a new OIympic games every two years, such is also the case with the 'ZOMBIES' movies, and we are here for it! Four years after the massive success of the Disney Channel Original Movie 'ZOMBIES' hit our screens and changed our lives, the whole paranormal gang -- plus some new faces & species -- are back for 'ZOMBIES 3' on Disney+! Young Hollywood catches up with our favorite on-screen inter-corporeal couple Zed and Addison, AKA Milo Manheim and Meg Donnelly, to get their thoughts on the 3rd installment of the supernatural romance musical, including how the felt the first day on set of the first movie versus the new one, and some of their favorite looks they got to show off this time around! They also reveal whether or not they think they would be friends with their characters in real life (and what questions they would ask them), plus they send a special message to their fans and play a game of "You or Your Character" to find out which one them between themselves or their character would be a bigger simp, be internet famous, write a breakup song, and more!