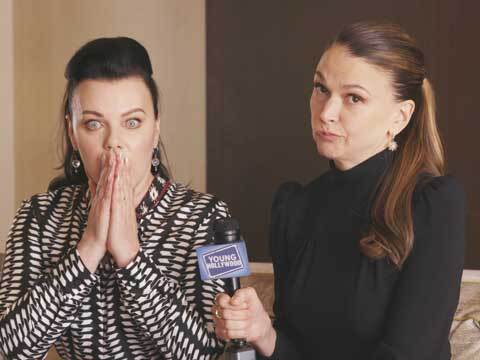 After 6 compelling seasons, TV Land's original series "Younger" is still going strong, and much of that is due to its stellar cast of fierce leading ladies, including Sutton Foster and Debi Mazar! Young Hollywood sits down with the two talented actresses during Viacom Press Day to get any scoop we can on Season 6 and the ongoing debate of Team Charles versus Team Josh! The show tackles a lot of issues and dilemmas in the land of love and relationships, so we are interested in hearing Sutton and Debi's own thoughts on these topics as well! They reveal whether or not they think it's possible to be in love with 2 people at the same time, plus they share their thoughts on what it's like to date in New York City as opposed to L.A. They also discuss the sometimes tricky scenario of dating someone who is either much older or much younger than themselves -- something Debi in particular has personal experience with! Finally, we ask the ladies to describe Season 6 of "Younger" in 3 different facial expressions...aaaand GO!