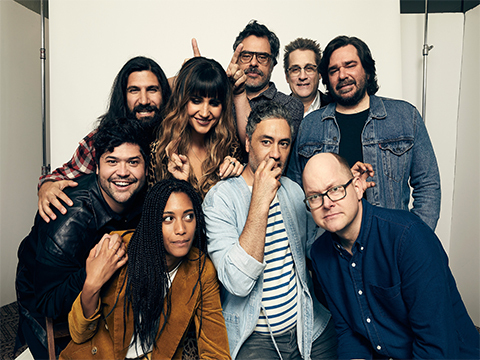 From the brilliant minds of "Flight of the Concord"'s Jemaine Clement and Oscar-winning writer Taika Waititi, "What We Do In The Shadows" began as a mockumentary about vampires living in the modern world which became a cult favorite and now a hilarious series on FX! The show follows the lives of 4 vampire roommates (and one familiar) chilling on Staten Island, New York, and tackling everyday issues like chain emails, cursed hats, werewolf battles, and burying bodies. As you do! Young Hollywood caught up with stars Kayvan Novak and Harvey Guillén, who play the vampire Nandor the Relentless and his familiar Guillermo, respectively, over Zoom to get the scoop on the two characters' increasingly tense relationship, which is coming to a head in Season 2! And speaking of heads, Kayvan discusses the upkeep for his flowing mane (which most assume is a wig!), plus they both describe their casting process and speculate on how Nandor and Guillermo first met!