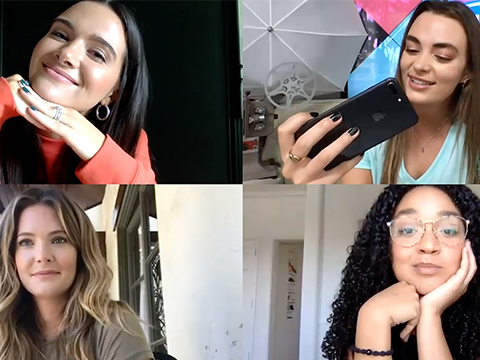 The Bold Type Stars Reveal Who's Most Likely To

We've been following Freeform's "The Bold Type" since the first minute of the first episode of the first season, and in the ensuing four seasons, we have watched the show quickly grow into one of the most heartfelt, relatable, and poignant shows on TV right now! The same can be said of the series three main stars, Katie Stevens, Aisha Dee, and Meghann Fahy, who have always been a blast to chat with, whether in the Young Hollywood Studio or in the field! To celebrate the finale of Season 4, we catch up once more with the talented trio, though this time from a safe distance. Via Zoom, Katie, Aisha, and Meghann tell us about their new morning routines while in quarantine and how they are keeping in touch since last seeing each other in March before every locked down. They also tell us how they think their characters would react to the quarantine, plus we play a game of "Who's Most Likely To" to find out which of them forgets their lines, puts everything on Instagram, falls asleep on set, and more!